Projects by the Numbers: Five Lessons from the Data

A lot of research has been done as to what goes in to a successful crowd funding project. As in all things, there is a limitless demand for free money (or money that is perceived as free.) With the pool of Kickstarter projects growing so deeply in the last few years, and their data being so available, a number of interesting observations have been made, both from Kickstarter itself and a variety of other sources:

According to Kickstarter’s own data, as of June 2011 a random project was 44% likely to get funded, but a really long project (90 days) was only 24% likely to be funded. After discovering this they lowered the maximum length to 60 days. Still, it is important to remember that a bigger isn’t always better; a shorter campaign can have intensity and focus much more likely to be lost during a longer funding drive.

Reasonably priced rewards are more attractive than more extravagant ones.

In a striking revelation, it turns out people want to spend less and get more. Also contributing to this data point, in my opinion, is that people are unlikely to spend much on an unproven stranger in most cases. What if they fail? What if they flake? Better to risk a little money in a lot of baskets until you become more comfortable with the idea of crowd funding.

Successful projects are more likely to have videos.

Though this data point directly measures the binary function of whether there is or is not a video, I think of it as a proxy into how much effort someone put into their pitch as a whole, and their Kickstarter page particularly. You only get one chance to make a first impression.

Successful projects ask for significantly less money than unsuccessful ones.

This one is a fairly straightforward example of overreach. If your project is too large for a niche following, or its perceived cost exceeds its perceived value, then real hurdles to your success exist. In my opinion, keeping the costs to realistic levels and explaining them (at least in broad strokes) is very important. 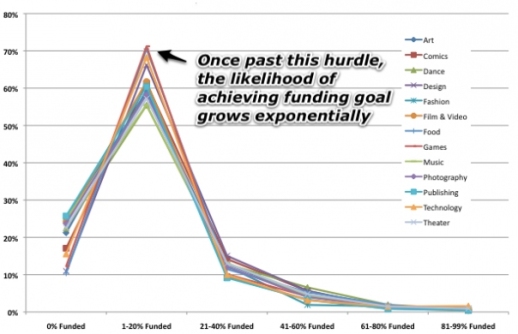 Successful projects are more likely to be successful.

Tautological, but true. One of the most powerful data points I have seen shows that if a project reaches a tipping point of about 25% funding, its chances of being funded double. So many projects fail without ever being given significant attention or funding – getting your project to this point means you could have what it takes to go all the way.

One thought on “Projects by the Numbers: Five Lessons from the Data”