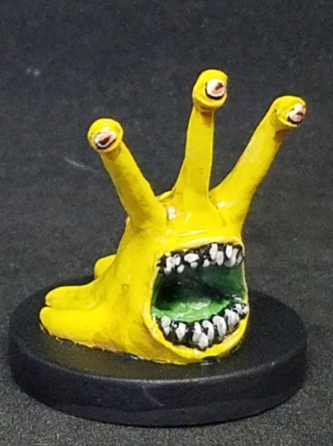 For the first posting in 2020, our painters sent us some cool projects and WIPs, be it miniatures or terrain. Have a look!

I hope you had some great time with friends, family and/or hobby projects – in our case it was more of the former and less of the latter, but still we managed to do some painting and printing.
Yes, printing – after some months of saving I finally bought a 3D printer, an idea I was toying with for a couple of years, actually!

For starters I went with a very basic model, the Creality Ender 3 FDM printer when it was at a “special” price on Amazon at Cyber Monday. For printer, 2kg PLU filament, a glass hotbed, several replacement parts and some other extras I paid around 200 Euro, which is okay for me.
I had done some research before and although resin printers are far superior in matters of detail, the printer and the raw material/resin are way more expensive, and with a toddler in the same flat I opted for the less toxic and easier to handle filament printer in the end.
After buying it, the printer lay dormant for more than a month because I had to finish a lot of portrait commissions for christmas and also felt a bit overwhelmed by the task of assembling and adjusting the printer in the few hours each day that I’m toddler-free.
It took a couple of hours (youtube and instructables were my friends) but then I finally had a working printer.

We plan to print a lot of terrain pieces, but for starters I printed a small mini I bought from heroforge.com about half a year ago – a troll for my Shadowrun PC.

It was the second piece I ever printed (the first being a small printer add-on part which helps with leading the filament) and I only used the standard 0.4 nozzle with layer height of 0.08mm. These settings would not be considered great for printing human sized miniatures, and I didn’t have too big expectations and was surprised how much of the .stl file detail was actually translated to the print.
As you can see the print lines are pretty visible on the primed version (left), but after a couple of layers of plastic putty on shirt and arms (a bit rushed, but fortunately troll skin is supposed to be bumpy anyway) the surface is smooth enough for a first try. I left the structure on the pants, btw. because I thought it could be fun to have different textures, as if the cloth of the pants was somehow rougher than the shirt.

On future projects I’ll try other smoothing methods like PU finish or varnishes which are supposed to fill the lines but not much of the detail, and I found out how to change the settings for a finer layer height. And of course the detail will always be inferior compared to a resin printer, but I’m sure we’ll still have a lot of fun with our new toy.

The paintjob was a bit rushed too (what else, nowadays…) but I actually love how the camo pattern on the pants turned out.

For size comparisons I took a pic of the mini next to a reaper bones mini (Dirk’s Troll Slayer sophie, fwiw). I think my SC could be a tad larger (she is not very bulky for a SR troll though, because she is more of a stealthy type instead of the classical troll brawler. And yes, I made a Troll Ninja. I’m weird).

The great thing with 3D printing is that I can easily scale the mini a bit before I print it again.

Dirk wants to show off his necron army: 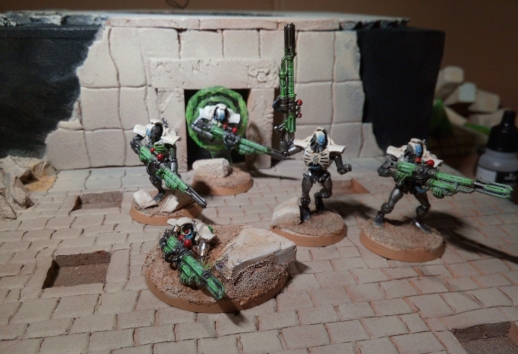 He has been painting on this army for quite some time in 2019, with the “Armies on parade” event in our local Games Workshop store as major motivation.
The first pic shows the units on the display base which Dirk made for the event, after that he added some detail pics.
He said “I picked a simple color scheme that was quick to paint so I could spend most of my time creating lighting effects on eyes and weapons. I did a bunch of conversions to make the minis more interesting and unique, I’m especially proud of the “halved” necron which is just appearing from one of the portals.”
Michael painted a lot despite being a bit ill (get well soon!): 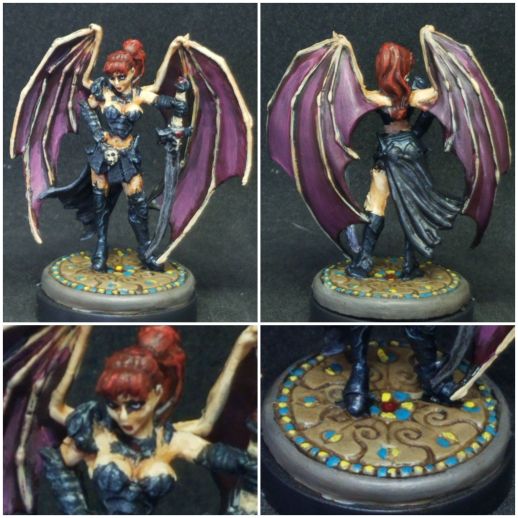 He wrote: “[H]ere are a few things I completed at the end of 2019. I’ve got the Mr. Bones from Bones 2, done up in holiday colors, Trollslayer Sophie, and a three-eyed slug alien from the Bones 4 Chronoscope expansion.”
A diverse array of minis for sure! The Mr. Bones is cool – who wouldn’t like a handful of bones for christmas, right? The alien is bright & weird enough to become “poster creature” for this entry, and another troll slayer Sophie! My poor troll is feeling endangered already… I love the vampy look, the colors work great to convey the style.

Timothy sent us pics of a terrific piece of terrain:

He said: “I made a ruined tower out of styrofoam insulation and wood sticks. I included miniatures in one shot to show perspective.”
Wow, that is a really large piece, very cool project! You cut the bricks separately and glued them to form the wall, right? Probably a lot of work, but so much more “3D” than a simple textured tube – I love the effect!

Jim is “on the road” this time! 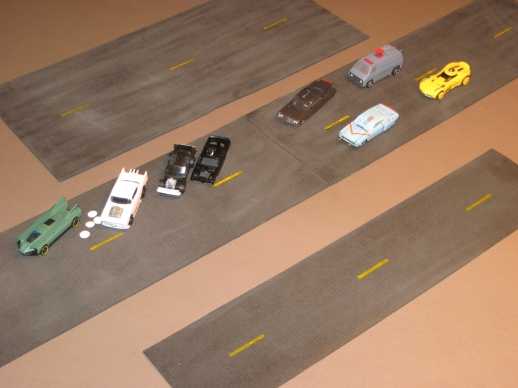 He wrote: “I hope your holidays were good. Mine were really busy. All good stuff, but busy. I didn’t get a lot done. One thing I did work on and am willing to show are some items for car combat games. Specifically for Car Wars but usable for almost any other game such as Gaslands, RoadWolf, Dark Future, Roadkill, Axles & Alloys, Outrider, Warlands, etc. The road sections are made from rubber shelf/drawer liner and were embarrassingly easy to make. The group of cars on the left are WIPs with a fair amount of work left to do and the group on the right are some examples of completed vehicles from a while ago. The fun part of this is that the basic materials are just Hot Wheels or Matchbox cars disassembled and modified however you see fit. Different people have different aesthetic ideas ranging from far future to near future, clean to dirty to junkyard, on road to off road to post-apocalyptic wasteland!”
Fascinating! I never realized how many car combat games exist… maybe wasn’t even aware of the genre :-p! Dirk said he played something similar (“Road Hogs”, a post-apokalyptic RPG setting where biker and driver gangs of Ninja-Turtle-style animal mutants battle each other in the wastlands of California. Fortunately he’s as weird as me, so we make a good match there!), and since I “stumbled upon” a Kickstarter offering 3D files for postapokalyptic cars, we could even try one of the systems you mentioned!

Update: Arjen sent us his project!

Anyway. For Project I decided it must be a Bones 4 add-on. As I enjoyed the little crabs, it was time for the big one. During the Bones 4 campaign there was a discussion with Brian on the forum about Fan favourites and I asked for a Garthim:
https://darkcrystal.fandom.com/wiki/Garthim

Next thing I know, there was a crabman in the expansion. I like to think this was their way of answering my wish.

So I had a dilemma: paint it as a crab, or as a garthim? As a compromise I looked for a dark purple crab and found a nice one recently discovered in the Phillipines:
https://www.nationalgeographic.com/news/2012/4/120418-new-crabs-purple-philippines-animals-science/

So my colors are slightly less vivid, but I like that the crabman is both dark and evil looking and at the same time very colorful. Only the eyes, I think need some kind of glow effect, but I need some experimenting for that.

And I will buy a second one to paint as a garthim. I owe that to Brian.”

And that’s why I enjoy the “Show me your project” postings – like the “Fan favourites” expansion on the latest Bones Kickstarters it allows the imagination to run wild. I mean, a crabman? I would probably never have thought of picking it to paint from the already weird bunch of minis in that set, but seeing him (it?) painted already gives me ideas how to use such a creature for an RPG. Thanks for the insight into your planning process (and how the mini came to be in the first place! And talking about the Dark Crystal: Did you take a look at the prequel series on Netflix? We only managed to watch a couple of episodes so far, but they seemed to capture the essence of the film quite nicely in my opinion. The “making-of” featurette on Netflix is also really impressing and inspiring in regard to miniatures and terrain making too! 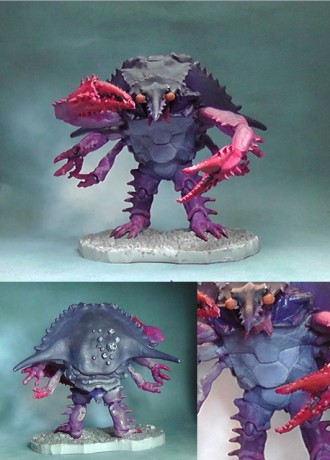 Want to participate in the next post? Email the pictures of your minis until Friday 01/17/20 to

2 thoughts on “Miniature Monday – Show me your project UPDATE”