Everybody hears about the heroes. Dragon slayers, powerful wizards, cunning pirates (okay, “heroes” in the latter case), but what about the ordinary folks? Like, for example, a grumpy farmer?
Have a look at this week’s peasant collection!

The peasant is cast in the slightly darker/grey bones material which will supposedly be used in all the smaller (human to medium monster) sized miniatures from now on because it shows crisper detail – I heard it might be a tad more fragile/less elastic than the white bonesium but I didn’t stomp on any of the newer minis to test that yet.
(I’m sure our little son will conduct that experiment sooner or later, and until then feel free to share your experiences with the grey bonesium, either via mail or comment!)

The edges are indeed crisp, and I like the concept, down-to-earth in a slightly comically way (the face a bit large in my opinion, and what happened to his right hand? Do you also think it’s really really small?), so it’s not surprising Monty Python appeared in some heads 😉

Due to much work and two coughing, runny nosed family members (I’m the last woman standing for the moment) neither Dirk nor I managed to paint our mini this week, but since we plan to paint a lot of the villagers in one batch we might be able to update this article soon.

Michael had a certain inspiration: 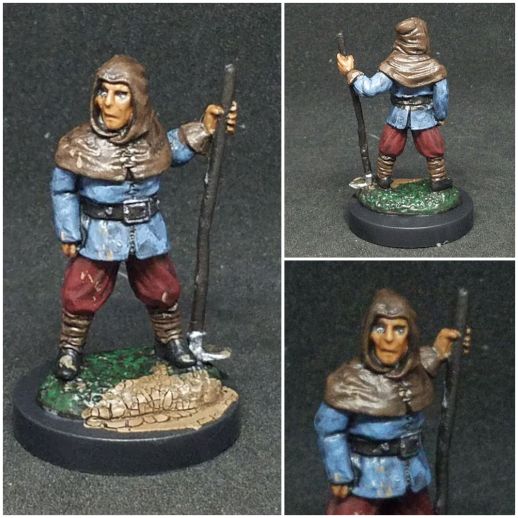 He wrote: “When I was looking at the image from the Kickstarter, I thought that he was holding a walking stick, but I was pleasantly surprised to see it was a hoe. So, instead of a traveler, we got a farmer. Thematically, I was sort of inspired by some of the dirty peasants in Monty Python and the Holy Grail. 🙂 I decided to make him relatively simple, with a softer blue color and darker red pants. I did a fairly heavy wash of Nuln Oil to make him look dirty. Agrellan Earth texture paint was used for the cracked dirt effect, and I made sure to slather a bit on his clothes and hoe.”
The combination of pale blue and red ist rather unusual for “cliché” villagers and could also work for a traveller or inhabitant of a larger city if the hoe was indeed converted into a stick or maybe a helbard. So this is how the peasant look in “Grail”?  😀 It’s been years since I last watched it, I’ll definitely check it out again (I watched “Life of Brian” much more often, and even thought of painting my peasant in desert-y beiges and sand because of it! Weird coincidence. Or painter’s hive mind again? Who knows…) Extra mud is always appreciated, the poor guy must have had a hard day on the fields, being pestered by weird knights and everything…!

I like your choice of colors, very plain and earthy colors, perfect for a simple peasant and probably similar to what I would have picked.
And I have to say, the face looks absolutely great! He’s like “Oy, mate! Don’t you dare touch that cabbage!!”, just grabbing his hoe and ready to use it on someone’s hands – or head, probably! The eyebrows are brilliant!

Jim’s farmer has a twin brother! 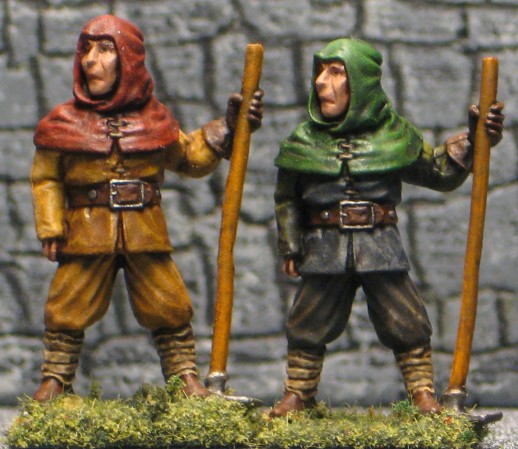 He said: “I happen to have a metal copy of this guy so I painted them both up as a comparison. I painted the metal one in green and grays and the plastic one in browns and a little red. The color choices are autumn colors hopefully without being too obvious. Both minis share the same colors on the shoes, calves, belt & gloves, hoe, and face. On each individual, the sleeves, pants, vest and hood are all different colors although some are very similar. The Bones mini is slightly larger than the metal one and the detail is a bit softer, but you can’t really tell this from the pic. It was only apparent during painting. A fun pair of minis that I’m very pleased with.”
Thanks for your info in the direct comparison – I agree that the difference isn’t visible in the end result, which is quite nice considering bones minis have a couple of advantages (besides the price) as in lightweight, sturdy and easy to convert. The color variants are also a cool idea, especially since the “accesories” are of the same color in both – it’s always interesting to see how one can achieve different looks just by changing only certain tones!

Want to participate in the next post? Email the pictures of your minis until Friday 10/25/19 to

(I fixed the dates. There was a mistake again, thanks for pointing it out – we’ll keep the two week schedule for the time being!)