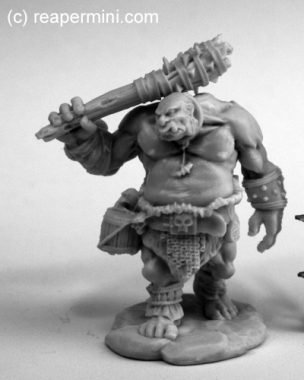 What is meaner and scarier than an Ogre? Yes, three of them!

The miniatures are highly detailed and (for fantasy monsters) very realistic in proportions and anatomy. Some of our painters considered them the best minis from the whole range of Bones III !

I wasn’t too inspired at first, but after some work I really liked the models: 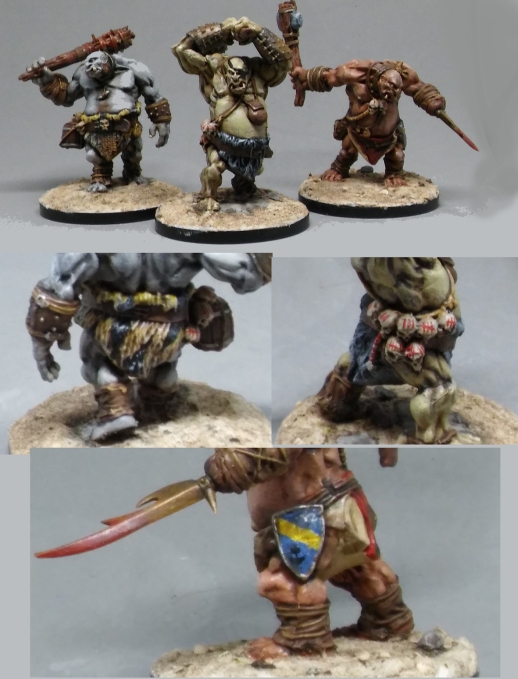 As these minis compose mainly of skin, I put my priority on that. After I tried a little bit with the first one – and heard that my wife was going to try different human skin colors – I decided to give them different skin colors, but inhuman ones. One has a very dark skin, as if he is coming from the south, the second one was inspired by old warhammer ogres, and the third one just got gray. Then the inspiration struck me. I was going to make a swashbuckling ogre pirate group, all of them originally coming from different places. The eye patch, the barrel, it all connected… so I added a cutlass-hand to one of them.

Antonia didn’t manage to finish the ogres and wasn’t happy with showing only base coat (she says she is kind of a perfectionist) but since she plans to use the ogres in a tutorial for skin tone painting, you’ll hopefully see them soon! Instead, here is what our little son (21 months) “painted” – he wanted to participate somehow and we gave him an old pre-painted mage knight troll and the only crafts paint we had available – metallic purple!

A bit blurry, but certainly everybody can see his potential *laughs* Obviously certain vampires aren’t the only monsters that are able to sparkle… or maybe it’s just a stone troll of amethyst variety?

Arjen likes the ogres, but unfortunately he hadn’t the time to finish it.

This is a WIP with the details like teeth, eye and little laces to be finished, but you can already see where this one is going. This ogre has a light skin color, set in contrast with dark browns for wood and fur. the metal parts are painted in bronze, giving the ogre a more primitive vibe. I like the overall effect, like to see the finished mini.

Jim is a fan of these ogres, thinking that they are the embodiment of what an ogre should be.

He used a yellowy brown skin tone for his trio, with natural, brown/gray colors for clothes and equipment. The yellow and the gray work surprisingly well together and with their similar skintone they look as if they were from the same family clan, maybe brothers? Since you liked the ogres so much, do you have plans on using them?

Michael also used a reduced color palette, this time based on green:

These ogres were painted green-brown, similar in appearence to my leading model. But Michael also added some mottling around their shoulders, a great idea to upgrade large plain skin areas. If you check on humans you’ll see that our skin varies in color as well, for example on joints, face etc. Thanks for bringing the fact to our attention!

P.S. Does someone have a suggetion for the upcoming Bones II slot? Now is your chance! 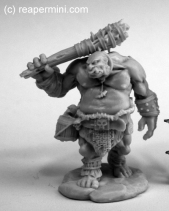 Want to participate in the next post? Email the pictures of your minis until Friday 09/14/18 to