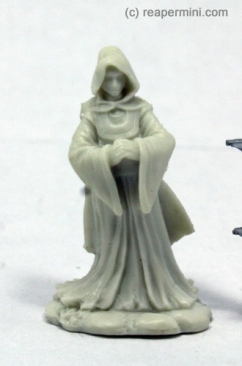 At first sight rather plain, this robed mini inspired a lot of different versions! Read on for space cultists, druids and more!

Note: We had everything ready. The minis were painted, photos taken and uploaded, all we had to do was write the article. Then our little one went on sleeping strike (the time he saved on sleeping went into screaming. A lot.) and we spent the whole evening as baby fire brigade. So it’s tuesday again…

From the first look, this is just another robed figure. Here is what some of our painters thought of it:

“It is like the Anirion mini, that if you just paint it, it may become boring; you have to add something to it.”

“I thought it was a little ho-hum when I first saw it on the schedule, but I really got into it.”

So let’s see what we got this time…

Antonia went for a royal outfit: 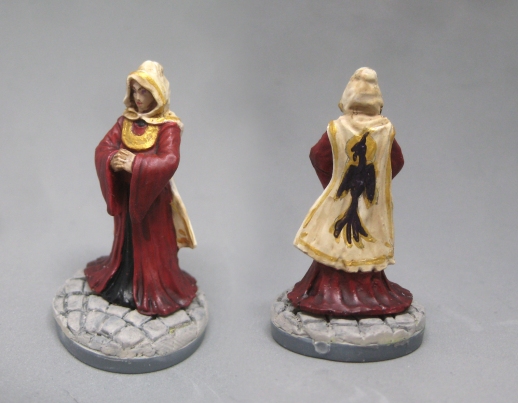 Antonia said: “I thought about using the mini as some aristocrat or noble, preferably in gothic sci-fi like the 40k RPGs, but also maybe as NPC in a fantasy campaign, so I used no definite sci fi elements like a gridded or technical floor. The combination of red and gold always looks like expensive cloth to me, so I chose that and creamy ivory as the second cloth tone. I wanted to paint a detailed crest on the back of the cape, but then I found that the gold paint was way to pasty and didn’t allow for details, so I settled for a rather rough, medieval style intead. Still worked out fine, I’d say. The color gradient – light to dark red on the bottom – isn’t visible on the picture, but to be honest, it’s very faint on the original too. Overall I liked painting the mini, it left room for patterns and markings.”

I had no idea how to use this mini as it was, so I made some little modifications: (understatement of the year – Antonia)

I used some parts from my bits box to give her a science fiction feeling. For this mini I tried to paint it “blanchitsu-style” (if you don’t know it, John Blanche is an artist working for Games Workshop with his own unique style), so I used a lot of washes on a white base colour, adding colour with the washes (ok, I also used silver and brown). It’s almost like painting with aquarell. The mini is still a work-in-progress, and some of the washes were still wet when we took the photos, but I like the results so far.

Arjen got his inspiration from the Reaper catalog:

Arjen’s Herald is dark and gloomy, like the “official” version on the Reaper page, and when we googled the name of the mini, a lot of dark robed and cultist-style minis turned up, so it seems a lot of people thought of Anglanda as a dark figure. It’s great that we have so many different versions though! On this mini I like the mask on the face with the cat-like eyes, and the pattern on the sleeves is a nice eye-catcher too! Arjen, did you find it difficult to paint a mostly black mini? I’ve heard many people complain about the highlighting/shadowing with black, that’s why I ask.

Jim’s herald was all autumn-influenced:

Jim got the idea for this druid-version of the mini while taking a walk among autumn leaves. He tried to get the whole spectrum of green, yellow, orange and red colors onto the mini, so like many artists he was inspired by nature. I like the contrast of the orange sleeves and the green robes, the bronze element fits well into the color scheme. Nice idea with the dots, by the way, it’s always a good thought to give smooth surfaces some kind of pattern. 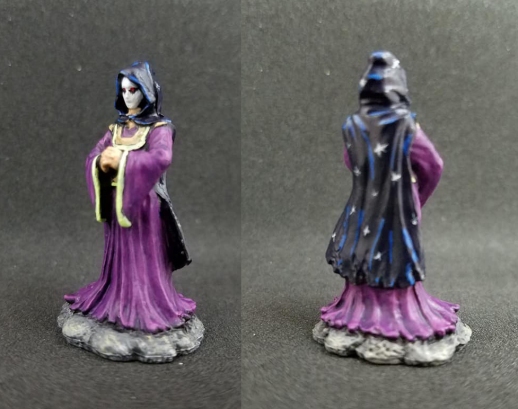 After seeing the all-too serene, smooth face Michael decided that it wasn’t a face at all, but a mere mask! He chose a purple and bright green color scheme, which is definitely special! He wrote he wanted to achieve a kind of creepy “space cultist” look, and I’d say it worked. The mask is a great idea, just by painting it white we are made to wonder what could be under it? Something scary, I’d say! The dark blue cloak with the “outer space” look fits greatly with the whole theme. Thumbs up! 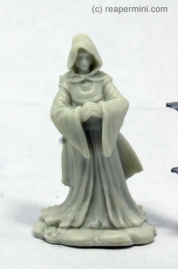 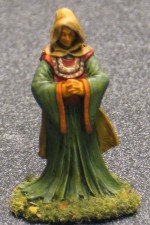 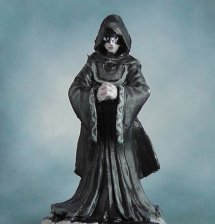 Want to participate in the next post? Email the pictures of your minis until Friday 11/03/17 to