Just a simple female cleric you think, nothing special. But our painters this week revived her and gave every one of them a unique and interesting life. Read on…

First of all – we still haven’t got around looking through our Bones 3 core sets, so we didn’t choose any minis to paint yet. Do you maybe have a suggestion? Feel free to post them in the comments!

I was distracted from the miniature monday mini this week, as I was absorbed by another challenge… as games workshop’s warhammer 40k summer campaign moved into it’s third week, it was time to paint tanks. I didn’t want to disappoint the emperor, so as a good imperial citizen I was obliged not  to paint one tank, but 5!

There is still something to do, but they are battlefield-ready. I painted all of them on one weekend (thanks to my wife who took the baby). Thanks to the regular participation on monday miniature, I improved my painting speed and my ability to plan projects ahead as I have only limited time. Just a year ago, I wouldn’t have dared to try such a project, but now I am proud of my new tanks.

Thank you David for the idea of this great blog (and the emperor thanks you too 😉 ).

Apart from this I managed to paint Olivia to a good WIP-state.

I painted her for a roleplay project as a priestess of a god of travel, so I gave her earthly colors. I think the brown rim on the bottom of the robe is especially handy as you can’t see the dirt which you attract if your clothes are dragged over the ground like hers 🙂

Olivia will be part of a small diorama with her travelling mates, and as this minis are also on our list, you will see her finished soon…

Antonia had real-life reference this time!

Antonia painted her mini in the style of one of her LARP characters, who is part of an lawful good order of fighters, clerics and healers. “Adela” wears a red head scarf and she always carries a red book with drawings and prayers in it, so this mini fitted nearly perfectly. She simply cut off the symbols and added her own, and since her character doesn’t wear any jewellery, she painted the bracelets white like some structured undergarment.

Antonia didn’t have much time (like me) and told me she probably adds another blended layer of white (to give the whole mini a cleaner look) and do more work on the eyes – what was supposed to be the blue iris now looks like eye shadow. But anyway, I like the color scheme, and the flask looks great too – nice glass effect on that!

Arjen chose an interesting combination of beige and blue:

I like the overall color sheme. It deals with earthen colors like mine, but it feels some kind of lighter because of the use of the pale blue. I can easily imagine her as a cleric of a good god/goddess or even a healer. And I like how the dark rims of her robe conclude the appearance.

Arjen told us that he used a fineliner for the eyes this time, and he is satisfied with the result. I totally agree, it’s great how such small things can make your work more easy. Next time he want to try a magnifying glass…

Michael painted a priestress of the earth:

Michael is still disappointed by the light on his photos, aas he is restricted to the camera in his mobile. Does anyone can give some advice?

Last but not least, Michael purchased a core set of bones III to keep on participating here. It’s great that you like it here and that you will accompany us further. Funny, that’s exactly how we ended up here (we purchased a Bones I vampire box to keep on).

Brian sent us a cleric of Life and Harmony.

She is really the brightest and most holy of this weeks minis. I like how you used diffenrent kinds of white, and the green is a good representation for life.

The runes are good freehands. Did you use a fineliner or a brush?

Brian told us that he painted her as a healing priestess for the Mythras game. Is this an RPG-setting? Will you use her as an NPC or character? 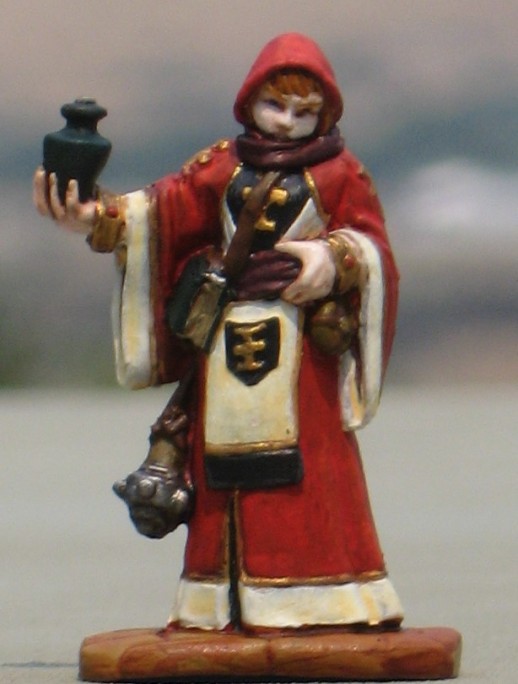 It’s nearly an inverse version of Antonias with similar colors, but this changes the appearence of the whole model. I could imagine this cleric as a member of a rich church or even the inquisition (as I first saw the symbol on the mini, my first impression was “I can’t use the inquisition symbol on the mini”). With some technical bits this mini could also be used for Warhammer 40k.

There were many different color schemes this week, from dismal earthen to regal splendor, merely through the choice of colors without conversion. Perhaps we inspired someone  to try his own? If so, you can always send us your pictures. 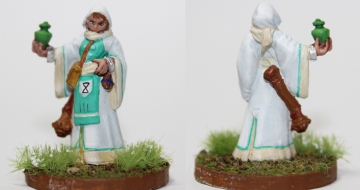 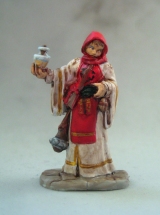 Want to participate in the next post? Email the pictures of your minis until Friday 08/26/17 to