This week’s miniature is so mystic, it floats! And we have a great range of colors, styles and ideas to show, read on!

Again it’s more a Miniature Tuesday than a Monday, but anyway, we’ve got quite a range of minis this week!

I was suprised about “density” of detail, there were layers over layers. A nice thing for painters in general, only annoying if you don’t have too much time on your hand, like us  😉 But since we decided to cover as many of the details as possible, we ran late. Even if the baby hadn’t run rampage in the flat…

Dirk took the floating aspect as an inspiration:

Dirk painted this mini as an air wizard because of the floating pose – he plans to paint wizards for every element, which I think is a cool idea! For air, he used mostly white and light blue, but also yellow to distinguish the color scheme from a water wizard. He plans to do a lot of drybrushing to make the whole mini more pale and “cloudy”.

I did a lot of conversion work: 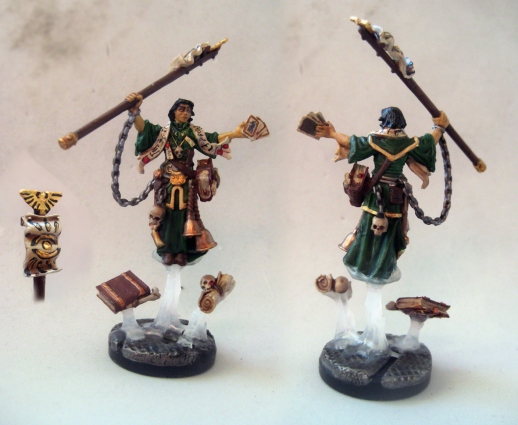 The floating pose and the robes reminded me of illustrations of Games Workshops 40k books, so I decided to paint the theurge as an “astropath”, blind, psychic seers who are capable of interstellar telepathy. Of course for that I needed a lot of grimdark gothic bits, like skulls and chains, which I found on Warhammer Fantasy Battle (aka Age of Sigmar) sprues of Flagellants.

I gave him a deck of cards which are used to divine the future; for that I cut tiny rectangles from plastic sheet and glued them together – I can’t tell how many time those pesky things sticked to my fingers instead of each other!! But still I like the result a lot.

For the floating I used pieces of clear plastic (e.g. from a PET bottle) as a stand and covered them with wood glue. That dried semi-transparent, which is okay for this kind of “telekinetic force”.

Overall, I’m really proud of the mini, it was a lot of tedious work but worked out really well! On the plus side, since astropaths are blind, I didn’t have to paint eyes this time, yay!  😉

Michael sent us a white, blue and gold theurge:

Michael said he “went with much brighter colors than last time. I found it to be a little tricky doing highlights and shading with white; I started with a light gray, then linen, and blended up to bright white on the highlights. The blue and gold was inspired by my old high school colors. I replaced that little piece of plastic with an actual flight peg to give him some height. And then – for the first time ever – I did up the base. I expect I’ll be doing more of that, considering the quantity of material I had to buy… :-)”

Nice work with the base! I like the combination of flying base peg and structured base, esp. the grass tufts. Which manufacturer are they?

The striping of the seams is a great idea! It looks very medieval and is a nice touch which I’ll keep in mind for future use 🙂

Arjen’s theurge is colored in a bright yellow:

Arjen wrote he invested some time in this mini, which shows! He was not too happy with the eyes (although I think they look at least okay) because he says his hands are not steady enough – something I can absolutely relate to. Although I avoided the problem this time (see above) I have had some good results with a very fine pen to put in the pupil. Maybe something to try?

He wrote “I chose to make him one of those rare arcane spellcasters who can wear light armor, which is different from the original illustration in the pathfinder book that this one is based on” – great idea! The upper part of the robes can double as armour if painted in brown! That’s what I love about this project, always some new ideas and perspectives.

He wrote that he painted this WIP in between baby and work (story of our life, at the moment!) and tried xenithal highlighting – that’s the one where the light comes from above, right? I like the rich colors and could imagine this one as a magician/priest of water. Did you chise the colors on purpose or simply because you liked them?

(Brian also had some troubles with the eyes. maybe we can collect some information or even to an article about that. Does anyone has some tips to contribute?) 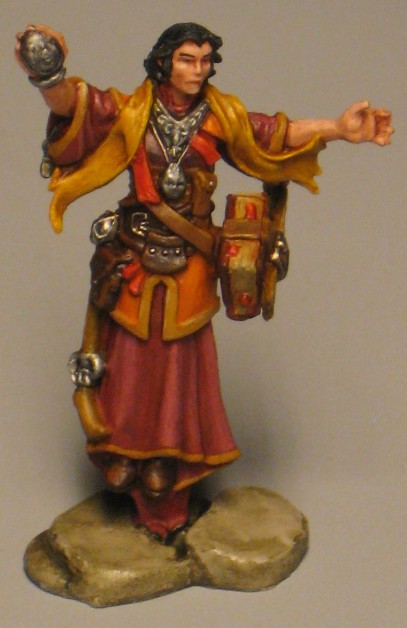 Great work on this one, Jim! I think you did best on all the details, your version is the first where I see this talisman-thingy in his sleeve. Kudos for finding that, do you use a magnifying lense or do you just have very sharp sight? Nice choice of colors, they work well together. And you even gave him eyebrows! He somehow reminds me of Benedict Cumberpatch as Dr. Strange 😀 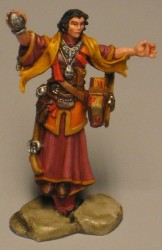 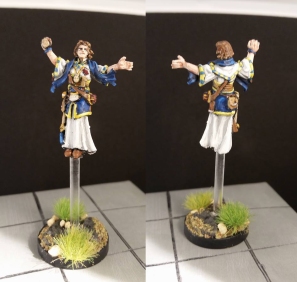 Want to participate in the next post? Email the pictures of your minis until Friday 07/28/17 to