Despite the variety contained in the Reaper bones set, I find myself returning again and again to the undead. Though they make up a minority of the total figure count, I think they are among the most interesting models to paint. The egyptians especially seem to have an above average level of detail to play with. This week’s artists do not disappoint when it comes to using that detail, either.

Pop up Terrain – This one is both out there and awesome. Do yourself a favor and check this one out. This project is worth a dollar or two on creativity alone. 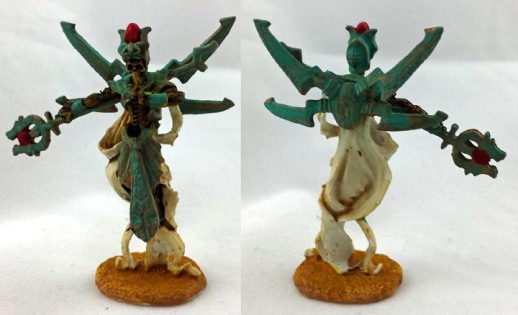 This weekend for my birthday I decided to do things for my birthday besides painting, so while I didn’t spare this guy a lot of time, I still think he came out pretty well. I’m especially happy with the bone since i HATED how it was going halfway through. The GW tarnish effect paint continues to work so good that it’s practically cheating. I advise everyone to pick some up 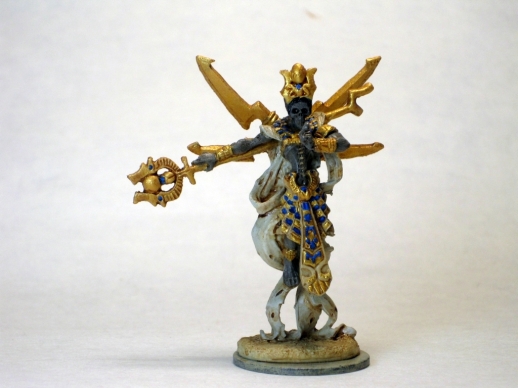 Everyone seemed to choose a pretty similar color scheme this week, but Magnus’s is certainly the highest contrast. I really like the contrast between the linen and the decay.

Dirk sends us a work in progress shot this week. Though not able to finish, you can see where he was going with the turquoise highlights (a color I apparently lack in my collection) and sandy base. If you field this guy in your Army upon completion Dirk, I want pictures.

Arjen too sends us a work in progress shot, though I think their color scheme is the most detailed and nuanced. Egyptian and undead are both definitely nailed, though the orange lit background drowns out many of the lesser details, especially on the cloth (there they are completely obscured.)

Harpy – plese send pictures of your harpy to Caffeineforge@gmail.com by 2100 MDT on 6/22

Oh Rats! – Let’s knock out another group of minor minis!

Familiars – Paint your favorite, or two or three – it’s up to you.

Bat Swarm – I think this is one of the weakest minis in the entire bones collection. Let’s see what we can do to fix that.