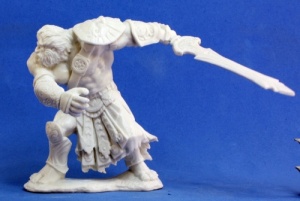 A few weeks ago we painted Yephima, the female storm giant. This week we paint her mate to complete the set. Take a look at the great work people submitted this week, and then check back to see the improvement over the previous blue skinned giants they worked on.

28mm Tank – I don’t particularly care for the model, but with all the heroic scale miniatures up on Kickstarter, it is nice to see vehicle projects. Someday they’ll even be one I want to back.

Cthulhu  miniatures – I don’t carcare for the sculpts on this one, but as we all know – I love the subject matter. 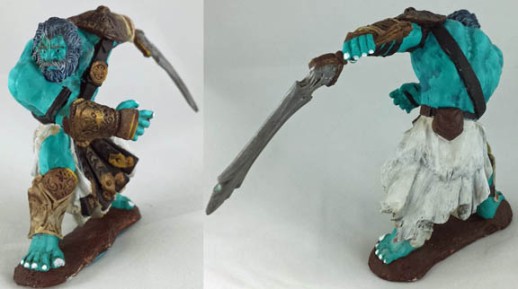 I painted my storm giant in the same palette as I painted my earlier female giant. The metal came out better, but the flesh came out worse. I think this was largely a time issue. I, like almost everyone else that submitted this week found this miniature took an inordinate amount of time. It was fun though. As one of today’s submitters put it, we “set a mean pace on this blog.”

I love the saturated look that David used on his mini. The shiny metallics also compliment the other choices made, and I love the subtle details like the edging on the waist armor. 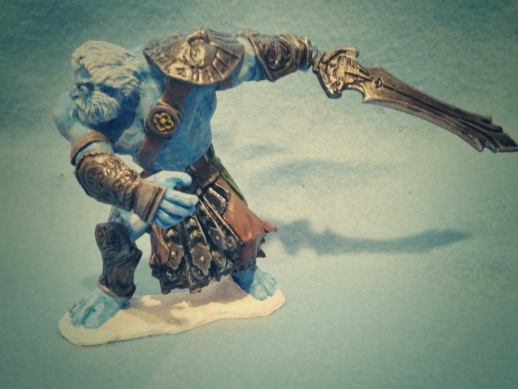 Jonathan went with a paler color scheme, but I love how the white hair looks, and not just because it reminds me of a certain bearded smurf..

Arjen, felt that he had a ways to go before his mini was finished, but I really like his color choices. Definitely check out the sword on this one – great freehand work.

Jessica really blew me away this week. I thought her last storm giant was great, but this one is outstanding. It’s colorful, detailed, and shows great technique. I also think this is her best NMN to date. I wonder where she finds the time. How long dd this one take you Jessica?

Update: In a nod to the amount of time this mini took to paint, there are 4 more minis to post.

William went with a magma theme, and showed amazing freehand, both in the cracks and on the kilt alike.

Magnus tried to go with a more realistic palette than most of the entries. 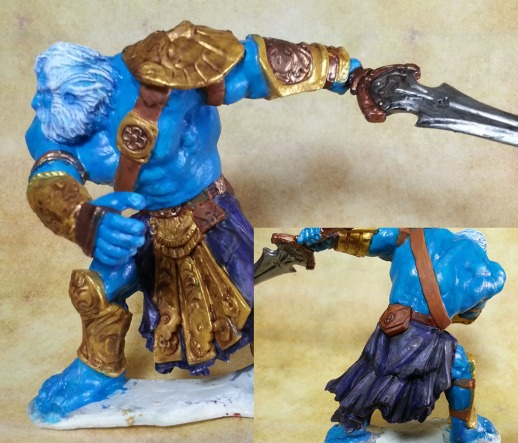 Jack went with a blue giant, as most of us did, but succeeded in his hair where I failed. Great job Jack. 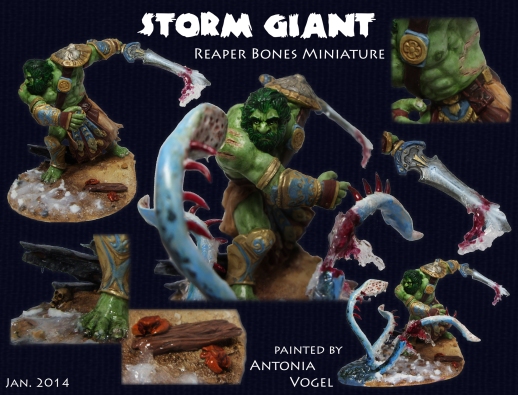 Lastly, but certainly not least we have Antonia’s model. It is the only green mini this week, but that’s not what makes it special. The base on this one is just jaw dropping, both in its details, and in the story in tells. Mind, blown.

Wench – Send your pictures to Caffeineforge@gmail.com before 2100 MST on 2/3!

Question: how many people have the hydra miniature