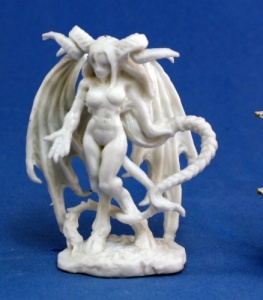 No, ladies and gentlemen – for once I am not describing Kickstarter. I am talking about a certain voluptuous demonic succubus, Virina, who is the focus of our painting projects this week.

This week there were no mini related projects of note on Kickstarter. That being the case, let’s talk about a delivery I got this week. Mantic had a real blow out on it’s most recent project a while back, and did an excellent job of keeping on schedule, but I was still taken a bit off guard when the first half of my shipment showed up from them the other day.

I backed Deadzone for one reason – scenery. Good scenery is hard to find, and their modular buildings are pretty awesome. In fact, so far I am more pleased than I thought I would be. I’ve found a few problems here and there of course, but nothing insurmountable. The biggest problem so far has been cutting the pieces off the sprues as the picture below shows. That barricade I assembled is tall enough for a 28mm mini to peek over, but that pile of sprues behind it is at least a foot tall and took about 4 episodes of Dexter to strip bare. 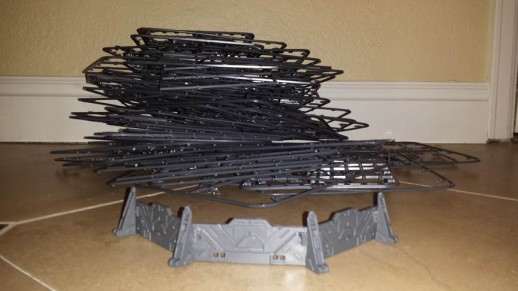 I’ll have a more substantive building to show off before Christmas. I have assembled the components into walls and such, but need to prime it before I assemble it any further.

This week’s mini was a popular one; there was a lot of participation. 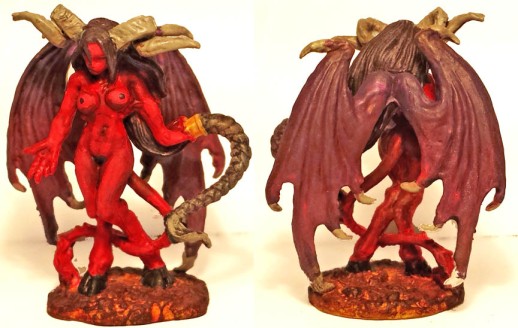 I worked really hard on blending the wings on this one, and was really happy with the result … that did not show up at all in the photos I took, so I ordered a real foldable lightbox from Amazon. Should be here next week. Red was definitely the most popular color scheme. 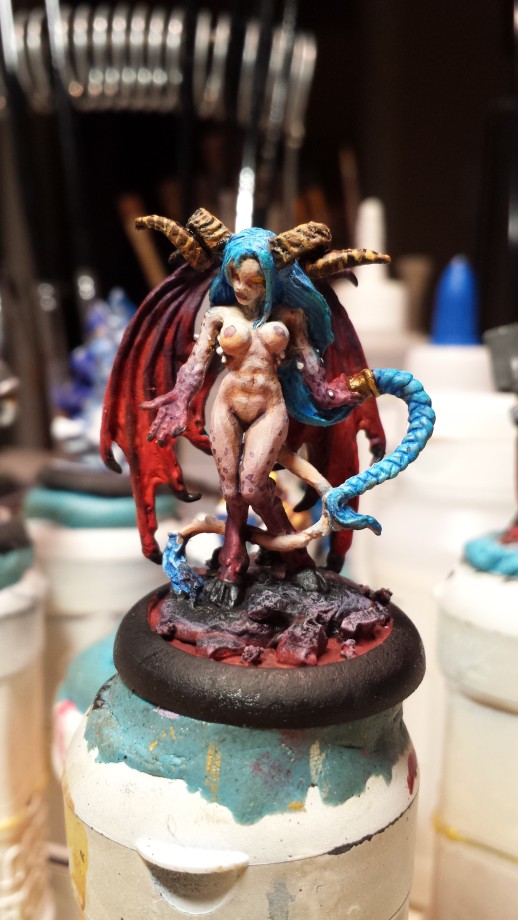 Clint was going with a very creative color scheme until his weekend was killed by the flu. His WIP is pretty impressive though. There is nothing about this model that I do no love. Look that the patterns on the skin there! 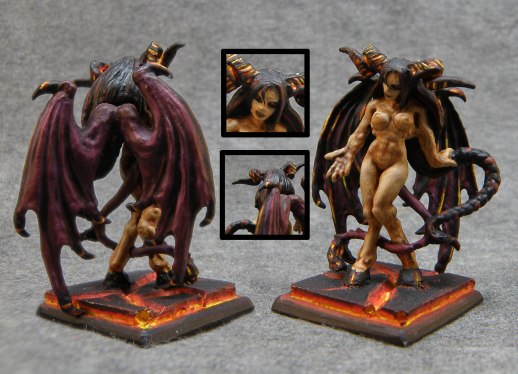 Jessica’s demoness was the fieriest of the bunch, and it looks incredible. 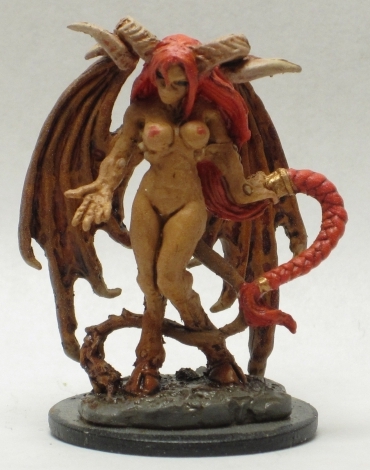 Magnus realized that the whip in the Succubus’s hand is in fact her hair, something I did not notice until the other submissions came in. 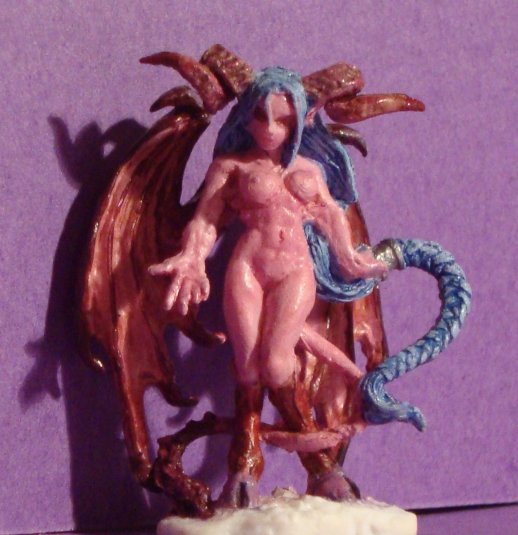 Arjen, likewise realized that issue, but didn’t quite have time to finish up their model. Part of this exercise is to participate though – to make the time to do even a little painting is better than letting another week drift by unused. 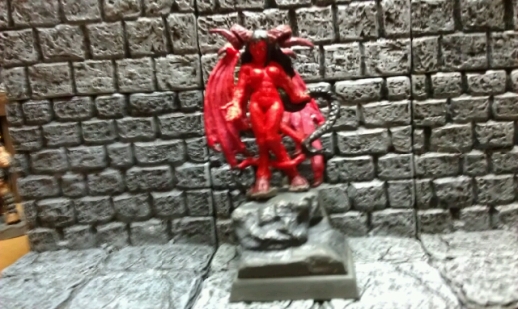 Garrett added a super sized base and a lovely backdrop to his scarlet demoness. 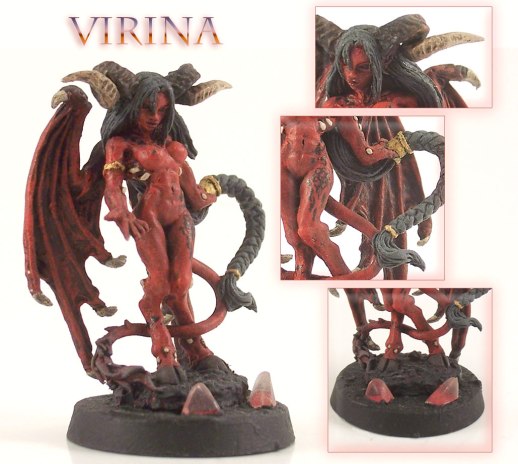 Laura painted the metal version, and the difference in detail is palpable. I love the tattoo and the classic color scheme. She talked a little about the project over at her blog. 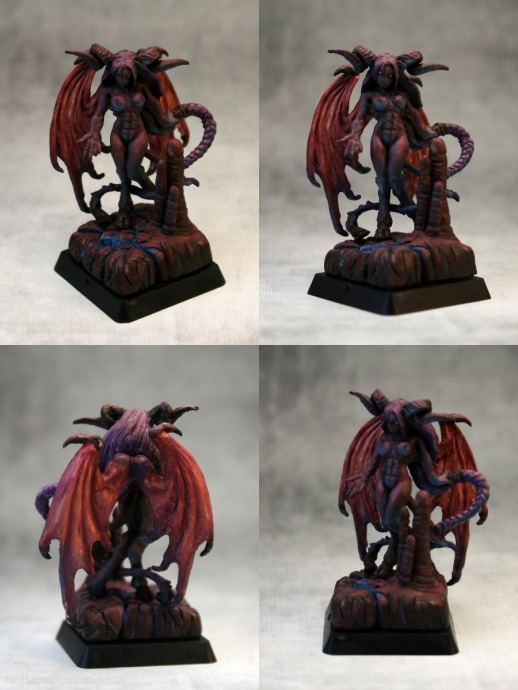 William takes the cake this week for dark and moody. This mini has some of the best ambiance I have ever seen. It tells a story in a snapshot, and that story looks pretty scary.  The directional lighting effects were very effective.

Kylie went with a violet color scheme and also rebased the mini. 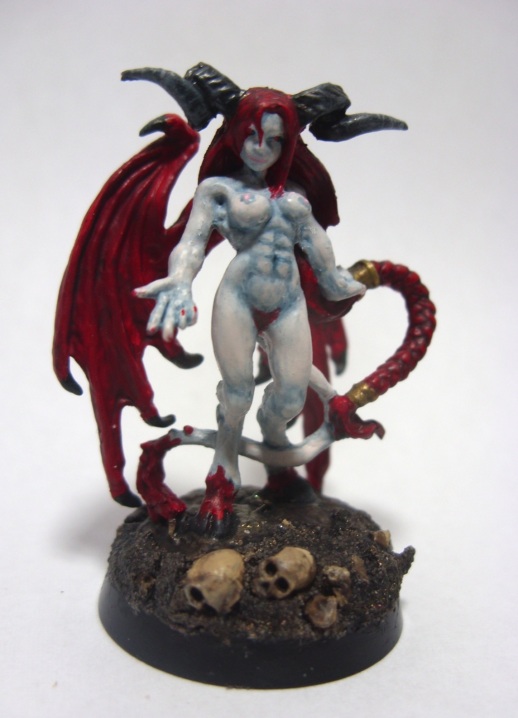 Antonia’s succubus is my favorite color scheme of the week. It’s just different enough from what you would expect, and very creepy. If I have to be seduced by a soul stealing demoness, I definitely don’t want it to be this one. Also – great base!

Update: Matt had a late, but spectacular submission.  I love the color scheme, but it’s the highlights that really make it stand out. The details are wonderful. 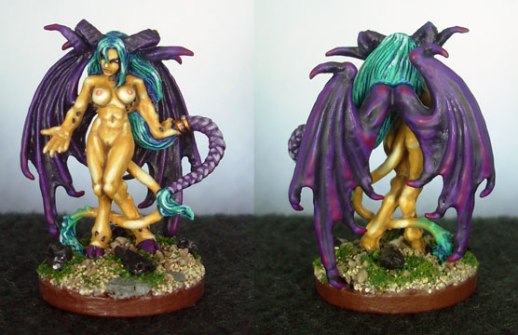 Next week we have a golem!

Stone Golem – Send your pictures to Caffeineforge@gmail.com before 2100 MST on 12/15!

Tags: Monday Miniatures
This entry was posted by David Winchester.