I didn’t plan to put up an easy model for the week of Thanksgiving, but I’m glad it worked out like that. I had a very busy and enjoyable weekend visiting family, but still found time to paint these adorable little guys. A few other people did too – you should look below, and check them out.

Twelve Elements of War – this is a project that has a lot of digital renders, but not much else. Also, the amount they are trying to fund doesn’t seem like enough to accomplish their goals.

This week’s mini’s were harder to light than to paint. Since there was so little to them, I did both of the little guys. The one in green came out much more visually interesting to me than the one in brown.

Magnus went with a brown color scheme as well, though I thought that his stripes came out awesome looking.

Jessica did both, but went with more of a classic color scheme. I was really surprised to see that she didn’t touch the eyes, considering how well she does gems on minis in general. 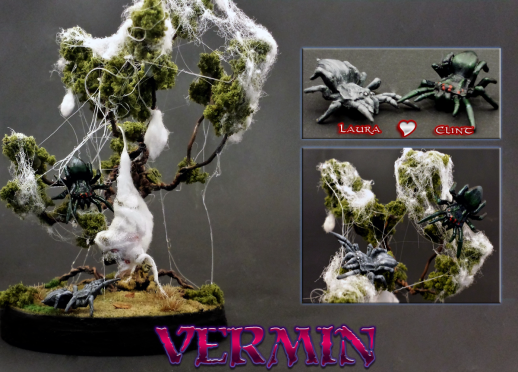 Clint and Laura were just straight showing off this week. Not only do their spiders look great, but the diorama they built to accompany them is just over the top. Even without the trees and the webs they would have been best in show this week. Great job guys.

Sadly we only had four people participate this week, but that is to be expected for a holiday weekend.

Edit: Arjen did some painting over the weekend as well, but I somehow missed the email. This one was worth the wait; Clint and Laura base is still spectacular, but I think this might be the best painted Spider this week. It borders on the real. Outstanding job. 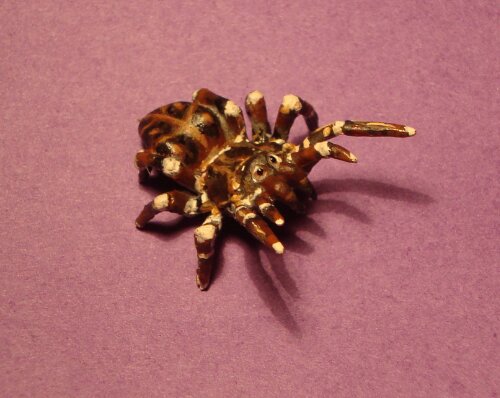