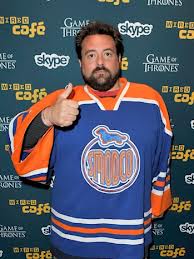 This man has wizard sleeves…

It shouldn’t come as much of a surprise.  After all, Kevin Smith has been turning out films without the help of crowd funding for going on 20 years.  So why has the poster child of Indie-gone-Hollywood decided not to take a bite out of that juicy crowd funding apple?  Peek below the fold to find out.

The Hollywood Reporter, citing an interview Smith did on LA Public Radio station KCRW, says that the maker of such seminal films as Clerks and Chasing Amy will not be turning to Kickstarter to fund his forthcoming Clerks 3.  According to Smith, “It feels like me trying to have a second bite at the apple by going, ‘All right man, now I’m going indie again with this Kickstarter thing.’ Like, the truth of it is, after all this time, 20 years later, I have access to money… If I don’t use my own money, I can just hit up some of my famous friends.”

I’ll confess, it does my heart good to hear that come out of Kevin Smith’s mouth.  As a man who fought tooth and nail to get his films made, he recognizes that there is a time in one’s career when its acceptable to look for a helping hand, and for him, that time has sailed.  That said, I think it’s a shame that this is newsworthy, but with the recent spate of high profile Hollywood types getting in on the crowd funding, I’m not surprised.  Reading this piece, I was reminded of Hollywood blogger Ken Levine’s post that kicked up a storm of controversy in May.  In it, he suggests we give our funds not to the Zach Braffs who turn to the crowd for support (nor the James Francos, I’d hasten to add…), but to the young Kevin Smiths, looking for a break.  I’m glad Smith agrees.

Now for something completely different!

Now, that isn’t to say that I haven’t received digital Kickstarter rewards.  On the contrary, I’m fairly happy with my ROI on projects that I’ve backed at the digital level, but this is the first time I’ve had a totally unexpected package waiting for me when I got home.

So what was the product, you ask?

My hardcover “Fate Core” and the accompanying “Fate Accelerated Edition!”  I posted an “I’m a Backer” for this project sometime ago, and I’m thrilled by the success it eventually achieved.  I can put these books lovingly on my bookshelf and smile when I see them there (I read them both about two weeks on my tablet, you see…), but having something physical in hand has gone a long way to relieving some Kickstarter ennui that was starting to come over me (this post was originally supposed to be about Kickstarter burnout…).  At any rate, I’m looking forward to a bevy of rewards that should be hitting my mailbox soon, and getting this one has inspired me to do a little scouting for more worthy projects.  Perhaps another installment of “I’m a Backer” will soon be in order…