This week we hit the jackpot, with lucky numbers all around. Seven, count ’em, seven Kickstarters were launched this week that prominently feature miniatures. Additionally someone has decided to keep Clint and Jessica company in their diligent weekly painting.

Want to know more? Read on my friends, read on.

With so many new projects we need to cover, let’s get right into it.

Now that we have the 7 out-of-the-way it is time to get down to the three. I’ll bet you thought that one of the three painters was going to be me. Sadly I spent the weekend sick in bed, and continue to live out of a hotel. The good news is that I did bring painting supplies to the hotel with me this week. The bad news is of course that nothing new was painted. Well, by me at least. The rest of my friends made progress as ever. 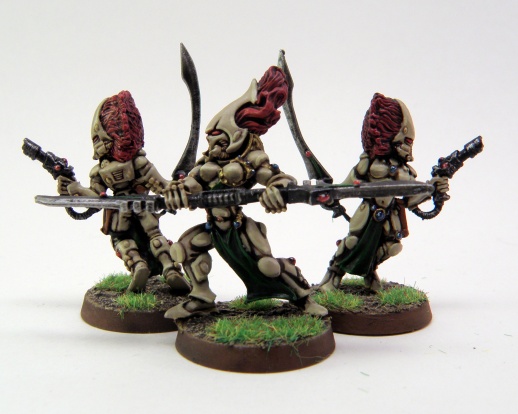 First we start with Jessica, who as always is painting her Eldar; this week she shows off by painting three excellent examples of Eldar warriors. Can you believe that someday I am actually going to fight that army?

Next we catch up with Clint, who is steadily working through a seemingly endless supply of orks. How many more orks do you have anyway Clint?

Lastly, new arrival Kerry shows off her detail work on what I believe to be a Mercs miniature. If you think that’s awesome, you should see her Khador army sometime.

Want to share your painting with the world? Email me your pictures at caffeineforge@gmail.com