I’m a Backer… of Nothing for a While 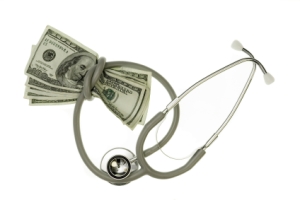 Over the last 6 months, I have become a frequent patron of Kickstarter projects. At best this makes me a serial backer that appreciates and supports all the hard work that creators are putting in to their passion projects, and at worst that makes me an addict (that can quit any time I want.)

Unfortunately, real life circumstances sometimes get in the way of the things we want to do. Today I unfortunately had to un-back a number of projects, and will likely be significantly curtail in the next few months.

Want to know why? Read on.

Two weeks ago I started experiencing abdominal pain. Not oh my god make it stop hurting pain (though it is edging in that direction,) but annoying, disruptive pain. The doctor’s don’t yet know what it is, or if it’s serious, but they do know one thing: It’s expensive.

I have pretty good health insurance, but of course you’ve got to hit your deductible first, so after one doctor’s visit, and two tests, I’m down about $2,000. Keep in mind that the super majority of the costs on the second test are paid for by insurance, and it’s still a wallet breaker. This won’t break my bank or anything, but it will thoroughly curtail some of my impulse buying habits and frivolous purchases.

And at the top of my frivolous spending comes Kickstarter. After I discovered just how much I had spent last year, I throttled way back; I even set up my Kickstarter spending as it’s own category in my budget. Unfortunately for now, that category has been defunded entirely.

I suppose it’s possible that something that is Reaper-awesome could draw me back in, but for the time being I am just a voyeur on the Kickstarter scene, not a participant. That being the case I will be discontinuing my “I’m a Backer” column for a while; I just don’t feel right recommending projects that I’m not passionate enough to contribute to.

Regardless, I will be keeping an eye on the site, as I always do, and discussing all the trends, positive and negative, that I come across. I remain passionately interested in Kickstarter, even if my financial resources are currently strained. This is not a topic I see discussed too often: How do personal finances influences people’s Kickstarter choices.

The only time it ever seems to come up, is when a mega project (Kingdom Death or Reaper come to mind) produces enough stretch goals that it drives people to the financial breaking point in the attempt to get everything; completeism is real and powerful thing, and though I think this is one of the things that makes stretch goals so effective, it also can be hard on the credit card.

The most vivid example I can think of this behavior was actually on The Gamers: Hands of Fate, where a couple of truly passionate fans talked about how they were skipping meals to save more money so they could give even more to the project. The creators sensibly stepped in and told their fans that eating was more important than backing any project, and that they should not contribute more than they could afford.

Good advice, if ever I heard it.

So has anyone else ever had to make hard decisions about which projects to back because of external financial factors? I’d love to hear those stories.