Sailing the seas of piracy in a Shanghai shopping center 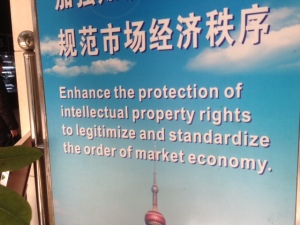 During my recent assignment in Shanghai, I found a little time to engage in the business traveller’s favorite pastime:  shopping.  When you go some place interesting, the people in your life expect gifts.  Plus, a big part of my job is about understanding how people live, and an important element of that is having experiences and understanding them in context.  So taking time out to shop is really part of my job, you see (that’s my line and I’m sticking to it).  In urban Shanghai, shopping is an adventure unto itself; a journey into an ambiguous netherworld, with connotations for manufacturers and content producers alike.

Look below the fold to understand why.

First of all, lets make no bones about it: piracy is big in China.  I mean, really big.  Whether you’re talking media content, clothing, technology devices, or practically anything else we take for granted, someone in China has found a way to pirate and profit from it. It’s everywhere, and in a place like Shanghai, nearly everyone benefits from it to some degree—either as a consumer, or (less frequently) as a purveyor.

For instance, if someone says to you, “I enjoy watching foreign programs online,” what they’re really saying is, “I download pirated content from the internet.”  And to certain degree, it is completely understandable.  After all, the government tightly controls the volume of foreign content that legitimately enters China, so consumers with an interest in that media have to circumvent the “traditional” channels.  None of this is really news.  What is interesting is how much piracy is taken for granted.

Take Han City Market, for instance.  This ramshackle “shopping mall” is a four-story testament to black and gray markets, and is a serious shopping destination for locals and tourists alike.   Nestled in the heart of one of Shanghai’s innumerable shopping districts, where high-end brands like Prada and Cartier have four or five story shopping enclaves all to themselves, Han City is a testament to a thriving underground economy, largely fueled by an influx of cash from shoppers visiting from the countries most outspoken against China’s lax treatment of IP law (for the curious, that lovely bit of Engrish at the top was snapped just inside Han City’s doors, right before a nearby burly informed me no pictures were allowed…).

By my estimation, Han City’s four floors encompassed several hundred variations on five basic themes, plus a sixth wild card store.  Of the core five stores, you could find purses, wallets and watches (the classic, “I got Prada! You want Rolex?” shop), curios and Chinese art reproductions, gadgets and bootleg discs of all varieties, ties, scarves, and traditional costumes, and finally shoes.  And that sixth wild card store type, only to be found on the topmost floor?  They sell prescription eyeglasses while you wait…  At a place like Han City, you have to assume that everything is a knock off and take it for what it is.  Its like a big seedy flea market.  The prices aren’t set and stone, and if you have a knack for haggling, you can find a pretty good deal on practically anything in the joint.  Regardless, spend much time in a shop, or ask for a name brand product, and you’re guaranteed a good story, even if no money changes hands.

Cybermart stands in contrast Han City.  It blends an air of legitimacy with a more candid acceptance of piracy.  At Han City, no one quite acknowledges that their product either fell off of a truck, or came from an “after hours” batch.  At Cybermart, if you talk to the right people, they will tell you precisely what is and is not the real deal, and the pros and cons of each (if you want an “iPad Mini” that runs Android and will die after a week, by the fake one…). Like Han City, I visited Cybermart on multiple occasions to take it all in.  As you might imagine, Cybermart is devoted to consumer electronics, across three magnificent floors, the first floor hosting the greatest number of legitimate storefronts (and they are very current.  I saw products there—real products—you can’t yet easily find in U.S. stores).  But as you go up, things get less and less… legit.

On the third floor, I observed what is undoubtedly a daily transaction (many times over).  A young man purchased a handheld gaming device of the most up-to-date variety, and in negotiating the transaction, received an envelope containing an adapter and an SD card, with instructions to take the card to another counter.  There, with no further exchange of funds, I watched as approximately 200 games were loaded onto the card gratis, while the proprietress enjoyed her beef with noodle.  This is where pretense goes out the window—thar be pirates in these waters!  Yar!

Like many people of my generation, I’d say that my perspectives on digital piracy are somewhat… conflicted.  When I was young (and poor), it certainly seemed somehow more excusable in my mind to download a song here or there (are you there entitlement? It’s me, Chris).  As my fortunes changed, my perspective did too.  After all, if I truly value content and want more of it, expressing my gratitude through the very basic, well established practice of paying for it makes a whole lot of sense.   Even if a lot of content producers have yet to come to the realization that this is bullshit.

Even now, I battle temptation. As I gradually transition my much loved library towards digital formats, I am constantly annoyed when I have to rebuy a book that I know I’ll want to read on my tablet.  I’m even more annoyed when the digital format costs as much or more than the paper copy (like, “kill a bitch” level of annoyance).  But I persist, because it’s the right thing to do (and because a favorite cousin once got sued by Uwe Boll, and who wants to court that risk?).

Now that I’ve become a content creator (we’re on our way, anyway), and having given lots of thought to formats, accessibility and their natural consequences, I’ve come to the conclusion that more access is better than less—even if that means our products are on The Pirate Bay day one.  That said we’d be ever so grateful to the folks who decide our stuff is worth paying for, because all those monies will go back into helping us make more cool stuff.  But whether folks decide to try it before they buy it, who are we to judge?  At this point, it’s pretty much safe to say we’ve all been there.

Piracy is a sticky issue, but this is a judgment free zone (unless your Kickstarter project sucks), so where do you fall on IP, piracy and all that jazz?  Let us know in the comments.

Also, as an example of some folks who are doing it right, here is a link to a truly magnificent RPG, done to the utmost standards of professionalism that is absolutely free to you (as in, you can legit download it from a torrent tracker, under the Creative Commons license).  But if you decide you like it, why not kick a few bucks their way to show your appreciation?

Tags: China, Piracy
This entry was posted by Chris Avery.