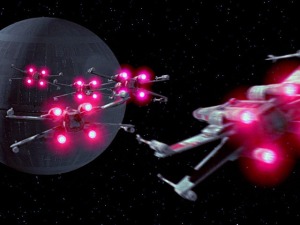 Jumping the shark (per Wikipedia🙂 Jumping the shark is an idiom created by Jon Hein that is used to describe the moment in the evolution of a television show when it begins a decline in quality that is beyond recovery. The phrase is also used to refer to a particular scene, episode, or aspect of a show in which the writers use some type of “gimmick” in a desperate attempt to keep viewers’ interest.

No reader of this blog could accuse me of hating on crowdfunding, but I cannot believe that Kickstarter is walking down this road, and worry that the escalating cycle of ridiculousness could in fact mark the start of Kickstarter’s downhill slide. Want to know why? Read on.

Last night I commented on the first project in this series of bad jokes, The Death Star, and it was very polarizing. Many online (including me) hated it, thinking that it eroded Kickstarter’s credibility. Others, including the 1,300 backers that have currently pledged almost a quarter of a million dollars to the project, and dozens of online pundits love the project.

Today this trend goes a step further, as the Rebel Alliance has responded, from China of all places.

For $11,000,000 the creators of this project will create a starfighter and use it to blow up the Death Star should it ever see the light of day. They plan to make this untried and untested technology for less than 10% of the (estimated) $130,000,000 price tag of the F-35. Of course you can pick any number out of the air when you are making a joke.

The punchline to this one is that “In the hilarious and unlikely event that we come close to reaching our Funding Goal, we’ll pull the plug on the project. We might have an actual engineer on our team, but Simon has no clue how to build an X-Wing. Well, nothing more complex than a Lego model, anyways.”

How can any creator ever be clearer in saying something is not a project (and thus should not be on Kickstarter.) Trading traffic for credibility is neither prudent nor wise in a fledgling funding model that still  faces plenty of skepticism for totally legitimate projects. Sloppy enforcement of Kickstarter’s internal rules is one thing, but flagrantly set them aside like this?

This substantially shakes my faith in Kickstarter as a market maker.