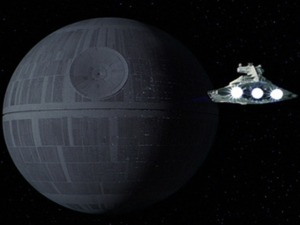 arter is all about impossibility if you think about it. Creators show up, and know they have it in them to do a great and unbelievable thing if only people, backers like you and I, will give them the resources. It is their job to explain to the rest of us, clearly and credibly, how they will accomplish this, and it is our job to judge the credibility of the creator, the feasibility of the business plan  and the possibility of the project. All these things settled, all that is left to do is pay our money and take our chances; Kickstarter is not a store, and nothing is guaranteed.

So what should we do – what should Kickstarter itself do, when the project proposed is quite literally impossible?

It was recently observed that the problem with many of the projects currently on Kickstarter is that I take myself too seriously. It’s a harsh but fair assessment.

The truth of the matter is that I am a big fan of rules; not all rules are good or correct obviously, but many of those that are in place were but in place for a good reason. I think Kickstarter can blame much of its success on the fact that generally only highly credible projects make it on to its site. This in turn is because of the rules it has put in place. Those rules however, are only effective if followed.

Lately I’ve been focusing on projects that I feel are being fraudulent or dishonest. What about those that are just being ridiculous – what’s the harm? Everyone wants a good laugh right? For Kickstarter they help drive traffic and increase visibility, and for the myriad of projects up at the time, that extra traffic translates into a few extra backers, depending on how sticky that traffic is. What’s the harm?

In my opinion, putting up impossible projects trades on the credibility mentioned above, and blurs what should be very bright lines on this legitimate funding tool. To be clear, I’m not talking about projects where someone’s reach might exceed their grasp, or endeavors that might be euphemistically referred to as ill-advised: I’m talking about projects that are out-and-out impossible to realize. Consider these two examples:

This project want’s to raise sixteen million dollars to re-shoot, re-edit, and generally remake 2002’s Master of Disguise. I seriously doubt that the people who own the film would allow that, and even if they did, I think the budget falls a little short. The fine people at Kickstarter probably should have prevented this project from making its way onto their website. It could THEORETICALLY be completed though, I suppose, if all the stars lined up, save for one simple fact: the creator wants the 1999 version of one of his key actors. Seriously.

Haley Joel Osment circa 1999 as Barney Baker. No disrespect to Austin Wolff, but Haley is the finest young actor of a generation. Unfortunately he is now 24 so this will present some complications. It’s a good thing that the original makeup team won an artist guild award because we are going to need all of them back to pull this role off. Also, Haley will have to be a little less serious and creepy than he was in The Sixth Sense.

Forget everything else – all the other high budget actors he want’s swapped in, all the new special effects he wants to add, everything. As powerful as crowdfunding may be at times, time travel is (so far) outside its purview. At the end of its 2 month-long funding period, this project will have only raised about a thousand dollars from 9 people, and will die with as much dignity as it can muster.

Likewise, a more recent, and successful version of this ridiculousness is a British attempt to start down the road to building the Deathstar. Seriously. For only twenty million pounds, the people behind this project are willing to make the enormous sacrifice of spending your money to develop an open source (hardware and software) set of Death Star plans. In its first two days in existence  it has managed to raise more than eighty thousand pounds toward its lofty goal from more than 600 backers – an average of more than 120 pounds a backer.

This project goes on to state that ‘The main challenge is assuring Kickstarter that this is a joke and not a serious project. As proof, the goal has been set high enough to make successful funding almost impossible.” First of all – that is not what the risks and challenges section is for: I would think that trying to build the largest man-made creation ever constructed in history would have more than two risks and challenges associated with it. Second – for a stretch goal, if they receive 543 QUADRILLION pounds ($850,000,000,000,000,000) then they will actually build said Deathstar.

Crowdfunding is about real people trying to breathe life in to real projects with the help of the larger community. While I understand projects like this are meant as jokes, their inclusion on otherwise reputable crowdfunding websites, is not appropriate. Maybe I’m alone in that though, what do the rest of you think?