As January comes to an end, I can’t help but think about how in two months or less, I (and several of my readers) will be inundated by a flood of minis from Reaper. In the lead up to such an event, you would imagine a calm before such a storm. A period of eerie peace and stillness while you wait for the next shoe to drop. If Kickstarter has its way though, this will not be the case. This week a whole slew of mini-centric projects dropped into an already crowded field.

Between tracking all these new projects, and working on the ones I already have, my bandwidth is feeling a little maxed out, but that’s no excuse to tune the new arrivals out .

Let’s explore them together.

When I started writing this segment, I thought I would spend a great deal of time updating everyone on a handful of niche products, but there is quite a bit more activity in this field than I anticipated, and it seems every week I will have new projects to share with you. This week there are four that I think merit discussion:

Even though I spent all that time looking for the latest and greatest for you, I still had time to sit down and do some painting:

First up, I tried another Bones mini – this time the troll. I went with red instead of the more typical green on whim – and was pretty pleased with how it turned out. Rather than try to paint this one in a subtle and semi-realistic way, like I did with the purple worm previously, I opted to paint this model in a very exaggerated way. The rippling muscle that was covering this mini was just begging for extreme highlighting, and I am pretty pleased with the results.

Clint and I also kept up our weekly painters duel using identical models. This time we used a generic dark elf. I tried some wet blending of red and purple, and am very pleased with the results, especially in the weapon. My paint job is the top, and Clint’s is the bottom.

So who do you think won? What could I have done better. This week was our third installment of this challenge – we only have 2 more identical models left to play with. Next weeks victim will be: 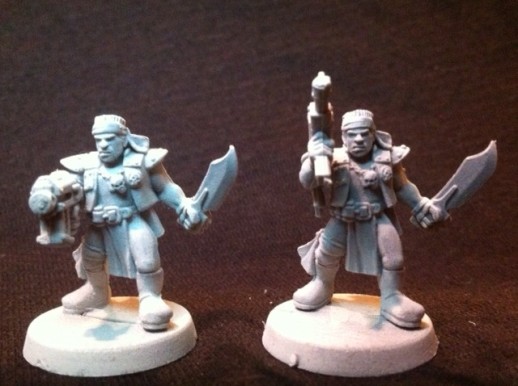