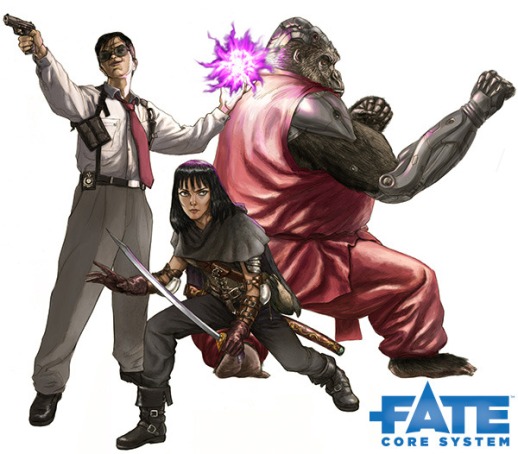 Traditionally our weekly “I’m a Backer” post is written by David, but this week we came across a Kickstarter project that I was so interested in I had to ask him to hand the reins over to me.  That project is Fate Core by Fred Hicks and Evil Hat Productions.  Peek below the fold to learn why I think Fate Core is a fantastic project.

I’ve been following Evil Hat’s releases for a while now, starting with their now classic, pulp inspired Spirit of the Century, all they way through the release of their luxurious, two volume RPG adaptation of the Dresden Files (which I maintain is absolutely the best adaptation of a licensed property for an RPG audience ever, beating out WEG’s classic d6 Star Wars, which is no mean feat).  The unifying heart of these games is the Fate system–a lightweight, highly flexible ruleset with an emphasis on collaborative storytelling and give and take between the player and the gamemaster.  Evil Hat’s Fate-based games have inspired something of a rule set renaissance in the gaming community, which few (if any) small production houses can claim.  It’s no surprise then that Evil Hat intends for Fate Core to be the essential Fate rulebook, solidifying their position as the go-to-guys for Fate-based gaming.

According to Evil Hat, Fate Core is: the latest evolution of the Fate role-playing game system. Inside you’ll find refined, clearer language about every part of the game — ranging from streamlined language about aspects and skills, to a unified approach for game actions and outcomes, to our trademark, rock solid GM and player advice.

Simply put, Fate Core is the best version of Fate we can possibly make, built upon over a decade of play and design experience by Evil Hat, and with the Fate player community at large, taking the best lessons from all of gaming and distilling them into a cohesive, compelling whole.

With Fate Core, you’ll be able to drive right to the heart of your characters, using simple-yet-deep rules to make the most of those stories. Throughout, you’ll use Fate Core’s mechanics to model how fiction, not physics, operates, producing an experience that’s better than “realistic” — it’s authentic.  [Emphasis is their own.]

What more can I say, really?  Their reward tiers are eminently reasonable ($30 for a hardcover copy of the Core Rules, and backers can download a pre-printing PDF immediately).  Their stretch goals are cool and attainable (I am VERY excited to see “Shadow of the Century” added to their 2013 production cycle).  Perhaps more importantly, they are tearing it up (at the time of this writing, they had exceed their pledge goal by over 50 times their original target), so you are basically guaranteed to get a shiny copy in your hands before long.  If $30 is too rich for your blood, $1 will get you a pre-publication draft of the rules immediately, as in before the fundraiser even closes, and $10 bucks will net you PDF copies of ALL the expansions added during the project (which should garner you about 10 virtual tons of goods by my estimation).  At this point, investing in Fate Core is anything but a long shot.

I’m delighted to have had the chance to sit down with Evil Hat’s Fred Hicks and ask him a handful of questions.

1) After launching so many cool Fate-based games, why did the time seem right to launch Fate Core–and why on Kickstarter?

We’ve always had a strong sense of “what’s next” with Fate, and have been pretty open about it. A no-setting, baseline Fate rulebook has been on the docket for “the thing next after Dresden” since 2005. Of course, at the time we thought we were looking at maybe a 2-year sequence of Spirit of the Century, Dresden, and the “basic” Fate rulebook. Instead we got Spirit of the Century (2006), Dresden Files (2010), and now Fate Core (2013), so that should tell you a few things about well-laid plans. I’m kinda glad it got spread out like that, though, as *this* baseline Fate book is far, far superior to the one we would’ve put out 5 years prior.0
We’ve done something kind of like this Kickstarter for our big release books in the past — preorders with folks getting access to the PDF right away, and a somewhat extended window for them to send us feedback on that PDF before we send it to print. We did it with Spirit, Dresden, and others. It’s a great method. With Kickstarter now firmly embedded in the online RPG market landscape, it’s a very natural fit.

2) What sets Fate Core apart from other attempts at a unified Fate system (Strands of Fate comes to mind)?

Strands of Fate — I’m speaking from conversations I’ve had with its designer, here, and we both agree — isn’t really Fate in the sense that it drifts so far from the baseline that it’s its own thing. And maybe that gets to the heart of it, there. Every unified, “setting-free” (“generic” is a poor descriptor for this sort of thing) version of Fate I’ve been aware of has been pursuing some sort of off-axis agenda, a vision of how Fate should be for those designers, but often not in line with what Fate is. I love the many third-party Fate derivations I’ve seen, but few of them have felt, to me, like strong, really-gets-it mainline Fate (there are exceptions: Diaspora and Bulldogs both live close to the heart). So the why really comes down to: we — Evil Hat — should be the ones making the case for both what Fate is, and where Fate should be headed. And Fate Core is very much about the where it should be headed thing. It’s the next step. Over the course of its creation we realized we weren’t so much distilling the earlier Evil Hat branded Fate implementations into a generalized form — we were creating the next edition, something tighter, more on point, better, clearer. It’s big.
3) Besides Fudge, what other games have influenced your thinking and how does that influence manifest in Fate Core?
Fate has a lot of ancestors, and enough folks have worked on it that it’s kinda hard to boil that down to a list. Aspects hail back to 7th Sea. I know Over the Edge was a big deal for Rob. Hell, there’ve even been closed loops in its development, where Fate borrowed from something which then in turn borrowed from Fate. I know there are elements of Fate Core’s current clarity that owe to ground freshly turned by the ploughs of Bulldogs and Apocalypse World. It’s a big gaming world out there, and we steal– uh, take inspiration– from most of it.

4) You have backed a lot of projects on Kickstarter–what do you look for in a project before you commit to supporting it?

A compelling reason to buy in at an affordable entry point. I rarely go for the big rewards. I like a little acknowledgement and credit for the backing, but don’t need it. Any kind of personal connection to Evil Hat helps, too, since a great portion of that backing is about giving a little back to the wider community.

5) Slightly off topic, but can this gushing fanboy expect a supplement for the Dresden Files RPG to bring the game inline with some of the significant, ahem, Changes of late?

We’ll make it up through Changes at least — we’ve been working on The Paranet Papers for a long time now (too long), which at least gets us up to but not through Ghost Story. It was supposed to beat Cold Days to press, but, well, the Dresden Files RPG entropy curse is a strong one, and it always makes things take… longer. Hope to get Paranet out by the end of 2013, though.

One thought on “I’m a Backer: Fate Core”