Life on the Pacific Rim 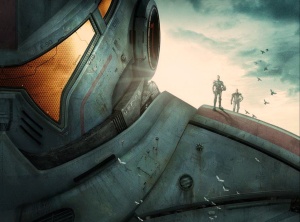 I love movies—but more that that, I love getting excited about movies.  Some of my fondest, geekiest memories are of hanging out near the front of the line wrapping around the multiplex, waiting to be let into the midnight show.  Sitting in that seat when the lights dim and the opening score begins to swell is pretty sweet (and sometimes emotional—I’m talking tears.  Like when the John Williams’ resounding fanfare kicked off The Phantom Menace.  The tears that flowed two hours later were for a totally different reason.  Fucking Jar Jar…)

But the sweetness of being in the seat sometimes pales to the delight of anticipation.  The weeks of conversations that preceded each of the Matrix sequels were intense, deep, and hopeful.  We’d spin what-ifs and scrutinize every line of dialog for clues to what was sure to happen in the next film.  Sometimes a movie delivered, and sometimes the expectations we set were too high to reach (for instance: the damn Matrix sequels).  The conversations, though? They always delivered the goods.

Time and distance means that most of our close friends shoot the shit online.  And we definitely don’t get to the theater like we used too.  For a while, my enthusiasm for movies kinda waned.  It’s not like I wouldn’t go and catch all the good nerd-fodder that made it’s way to the megaplex, but instead of buying my tickets weeks in advance, it became more of a, “Oh yeah, that flick hit theaters a week ago.  I should catch it next weekend…”

As if picking up on my brainwaves, filmmakers have taken to mediums like alternative reality games and viral videos to get jaded types like me back on the enthusiasm train.  The Dark Knight and The Dark Knight Returns both had me refreshing my browser to see what new immersive nugget would surface next…

So this has been a pretty roundabout and nostalgia laden way of getting to what’s been getting me excited lately.

Guillermo del Toro’s next big film is Pacific Rim.  It can be summed up in two words (and an abbreviation): Kaiju vs. Robots (kaiju being the big monsters that come from the little island of Japan, of which Godzilla is the most well known).  There has been a lot of early buzz for this flick, and some cool preview posters, but not a scrap of video (outside of the San Diego convention center’s H Hall)—until last week.

A couple of viral videos dropped, setting the stage for the tone of the flick.  And my god, how cool they are.  Even more than The Hobbit, Pacific Rim has me genuinely excited months before it hits the theaters.  Even this past summer’s blockbusters didn’t inspire as much anticipatory giddiness in me as Pacific Rim has.  It’s original (though inspired by the kaiju and giant robot genres).  It’s NOT a money-grabbin’ sequel.  It’s not an adaptation.  There are no sparkly vampires (that I know of).  I’m psyched.

So that’s what I’m jazzing over.  I’m curious if anyone wants to chime in and let us know what forthcoming nugget of geeky goodness they’re looking forward to.

One thought on “Life on the Pacific Rim”