The Life and Death of a Dollar 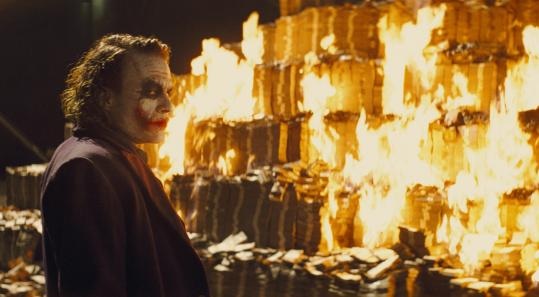 Easy come, easy go, right? Though today I wanted to talk specifically about the budget for the recently successful project, The Wardenclyffe Horror, I thought I would start off with a different financial topic: the Lottery.

Last night, as most of you know, Powerball hit more than half a billion dollars, and apparently that’s my number. You see – until that point not only had I never played the lottery, but I had never been tempted to play it. I blame my father and his stable of sensible sayings for that tendency. Growing up, I always heard that gambling was a tax on those who can’t do math, and generally, I am inclined to agree. In this case though, I think that two dollars is worth the ridiculously small chance (1 in 175 million, or 11 times rarer than being struck by lighting.)

I didn’t win, of course. The bizarre ‘what-if-I-did’ conversations and flights of fantasies that this ticket allowed for though, we’re totally worth the price of admission. Two dollars for a few hours of entertainment for a few hours? That’s almost as cheap as playing wow, and only slightly less worthwhile.

Since I didn’t win, it’s time to put my nose back to the grind stone. Really though, it never left. We’ve started spending some of the money we raised on Kickstarter for Kickstarter related things, art mostly. I received a rough of the cover illustration from  the cover artist the other day, and expect that  will send an update to the backers after another more polished iteration  I also expect to receive quite a few page roughs for layout purposes at the end of the week, that will mark the true start of work on the project. Everything is proceeding on schedule.

I have received a few questions though, as to where the money goes when it comes to making a comic book. Though I won’t delve in to specific dollar amounts in the post, this pie chart will give you a pretty decent idea. 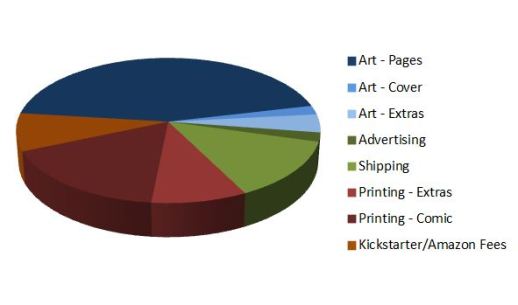 As you can see, almost exactly half of all money raised will go to the artists. The remainder is dominated by printing fees, though shipping and Kickstarter fees are nothing to sneeze at. Sadly we did not budget any money for the writers of the project, so they will wail and gnash their teeth as they have nothing to show at the end of the day, except – you know, a graphic novel that they own in full.

Let’s recap: I didn’t buck the 1 in 175 million odds to become a multi-millionaire, and those ungrateful backers also didn’t make me rich, instead only giving us just enough money to make our long-held dream a reality. Life is so hard. Anyone else have any terrible disappointments they wish to share? How about triumphs they wish to frame as disappointments?

2 thoughts on “The Life and Death of a Dollar”