One Week To Go 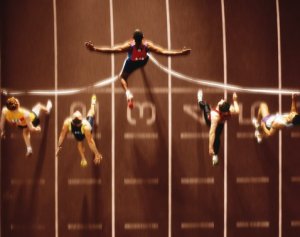 Soon we will actually talk about things besides our Kickstarter, we’ll talk about crowd funding in general, and maybe even comic books and board games that have nothing whatsoever to do with Tesla or Lovecraft, but it’s like that old saying: “It’s always darkest before the dawn.”

I’m afraid it’s going to get worse before it gets better. ‘Running through the finish line’ even in a metaphorical sense, requires it. As this is a horror graphic novel though, we aren’t really running, so much as effortlessly power walking after you, no mater how fast you go.

So today let’s talk about what Caffeineforge has been doing, what has been working, and what I think WE can be doing to get more results in this final week.

As you can see here, Chris and I have been hard at work getting the word out to media outlets about the project. Some of these have even resulted in a pledge or two. Getting traction and a wider readership is difficult though. Most comic and horror news sites have a no Kickstarter rule, or a special weekly Kickstarter column. Unless you have a name associated with the project you aren’t a story that is going to get them traffic, you are just one among many. This can be frustrating, but I totally understand – it’s just enlightened self interest. As crowdfunding continues to become mainstream, I expect this phenomenon to increase.

One big correlation I have seen with pledges per day and pledge amounts is blog traffic. There is no better way to get the word out than through you, my loyal readers. In the last four weeks we have six days of 400 plus views on the blog. Almost all of these spikes line up with high ($400ish) pledge days for the project. I believe the reason for this is two fold: organic traffic is going to the project and pledging to it, and organic traffic is going to the project and driving it up the popularity rankings.

At present, when you go to the comics section it will show you six randomly selected “popular” projects. These projects are selected from the top 14 projects of the popular section. Two weeks ago, when we were consistently in the top group, pledge were significantly higher than when we fell out of it; we have been every where from 10 to 30 in the interim.

In the last few days, we will of course make some noise across social media, but in between now and then, my request to you is to go stop by the project. Take a look at how we are doing, and leave a comment; ask a question, or answer the question of another backer. With one week left to go, people that want this project to succeed can do three things: