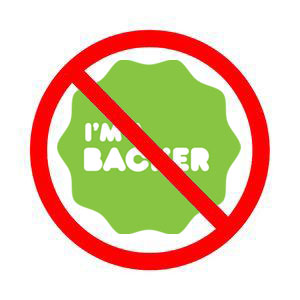 My name is David Bitterbaum, and other than having mentioned Kickstarter projects I find interesting on my website, www.thenewestrant.com I approach Kickstarter from a purely consumer perspective. It makes sense I would like Kickstarter, after all, I write mostly about comics on my blog, and Kickstarter has a pretty thriving comic-division. I also write about video-games, music, and movies—all the things Kickstarter can provide as long as you back a project for one of those items. Therefore, I thought I would share what a normal consumer such as me finds annoying  in a Kickstarter to help those of you who have Kickstarter-projects yourself and read Caffieneforge’s website, so you know what not to do.

The first thing I have to emphasize (in all bold letters to make sure my point gets across): Do not make your Kickstarter project only understandable if I watch a video! Many times I will be on a mobile device where loading a video could take a while, or I won’t feel like sitting for some minutes and watching your mini-movie to promote your project. You really need to put all pertinent data in text and (if applicable) pretty pictures for me to stay interested enough to consider funding you. If you place something important I need to know only in the video and I don’t watch it…you may have just lost a potential customer.

Do note however, that while I say I want text that does not mean I want an utter wall of verbiage. Please tell me why I should support your album/video-game/magazine/comic/food-item, but don’t spend hundreds upon hundreds of words detailing all the specifics. Tell me enough so I want to get your item, but maybe save the minutiae of the paper-printing process in updates for those of us who are already supporting you and are interested in knowing everything we can about the project.

One thing that makes perfect sense but people don’t seem to always do, have the completed project I’m funding be one of the rewards! Why would I fund your comic if none of the rewards get me even a pdf? Seriously, don’t ask for money to support your movie and then have the reward just be a sticker, let me see the movie! This is such a, “Well, duh!” idea yet it doesn’t always happen. Do note if I’m funding something you are giving away for free to everyone, this rule doesn’t really apply.

Speaking of rewards, it really bugs me when you have stretch goals that should be their own Kickstarter. You know what I mean, “If we go a certain amount above funding, that will fund the sequel!” is something I dread hearing, along with, “This will fund us doing another book!” So, this means if we fund your project, and then pump in extra money…but don’t reach that stretch goal, it was all for nothing? You should make it so the stretch goals go toward making the project I am funding even better. If it’s a book, give me spot-gloss, an extra-sized hardcover, free bookmarks, all that good stuff. If it’s a game maybe make your game a bit bigger, throw in some extra characters, whatever else you can do to make the game better (without extending the time I have to wait for it by too much, please). Now, if you make a reward option for your Kickstarter one that gives me extra future goods, I’m okay with that. Assuming the Kickstarter gets funded, my choice of paying more has you promise me your game’s expansion pack, your next movie, or future comics you put out regardless of any stretch goals—I’m perfectly alright with this as I feel you’re giving me a commitment to future items, not dangling the prospect of them in front of my face shouting, “But you only get this new object if we achieve thousands of extra dollars!”

It also bugs me when people make a goal that isn’t actually as much as they need. If you require ten thousand dollars after taking into account the Amazon fee and what it will cost to make extra rewards, don’t make a Kickstarter asking for just five thousand thinking that a lower goal will get you more backers and therefore somehow get you more money than if you just asked for the 10 grand at the start.

Lastly, I dislike it when the people behind the project don’t seem that interested in doing it. Show me you’re excited to make your new project, tell me how my money funds your dream, do stuff like that. Don’t say you’re just doing this because you want to make some money and figured hopping on Kickstarter was a great way to get cash as it has been in the news.

This post has sounded kind of negative, but it just makes me sad when I see a Kickstarter that looks promising–and one of my pet peeves causes me to lose interest immediately. Other individuals may be bugged by some of my complaints more than I am, have other turn-offs of their own, or love Kickstarter so much they fund anything even if it has annoyances such as the ones I’ve described. I just know that when it comes to getting the money of me, a regular person who enjoys using Kickstarter, doing the things that bug me would be a sure way to get me looking at another project. Advertise to me correctly, keep my interest, and you are much more likely to get my support. It is as simple as that.

One thought on “My Turn Offs – or – Kickstarter Pet Peeves.”