Welcome to another installment of everyone’s favorite Wednesday column, “I’m a Backer.” This week we return to a familiar topic, both for this blog and this column: video games. Just when you thought the turn based trend on Kickstarter was starting to run it’s course, another great looking game enters in on the scene. This week discuss Hero U: Rogue to Redemption. The minute I saw this game I had to back it. I love isometric party games and grim wasteland adventures as much as the next guy, but this game touched a part of me far older than my love for Fallout or Baldur’s Gate; this game hit me right in the Amiga.

Whats an Amiga? I guess you’ll have to keep reading to find out.

The part of my audience over the age of thirty might remember the Amiga was a gaming computer of the late 80s and early 90s that was quite popular before dying a quiet death as other technologies, most notably windows based PCs, devoured their market share. To me though it was an amazing opportunity  I grew up in a video game fluent house, with a Nintendo,  a PC, and a Mac, but for me, the Amiga was the best thing we owned. Populous, Kings Quest, and Marble Madness – you name it, I played it; I loved it. Sure Hero Quest (later Quest for Glory) is the game that most directly ties to this project, but it isn’t that particular title I am looking to play again. Keeping with the nostalgia themed Kickstarter projects, I am looking for a feeling, and I think with this project, I have found it.

Hero U starts its pitch by offering the following features:

Adventure-style puzzles that are an integral part of the story 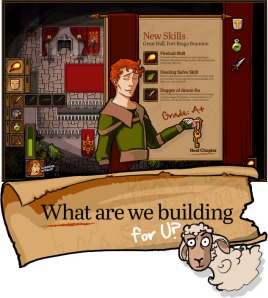 So far so good right? Many of these features have also been promised in other widely discussed games lately so I won’t bore you with them. I’d rather tell you about what sets this game apart: vision and style. Between it’s UI and its concept art, the main message I get about this game is that it is not trying to be another photo real dungeon crawler – that it marches to the beat of its own drum; given what we have seen from the last few record breaking projects to walk down this road, this is a nice change of pace. There is more to an art budget after all than impossibly bulky armor, and weapons so large as to be unwieldable, afterall.

So the product looks good, what about the project? The project, I am pleased to announce, is very well put together. The creators are very credible for starters; if you missed the allusion earlier, about Hero’s Quest and Quest for Glory, then let me spell it out for you: these people are professionals – they have been creating video games almost as long as I have been alive.  What they want to make with this project, game play wise, is not so different from everything they have made in the past. This, coupled with their wonderful art and strong presentation really makes me think that they have what it takes to bring their vision to fruition.

Reward tiers are priced to perfection, and are one of the better examples I have seen on a project. Though I am usually loathe to climb too high on that chart, because there are so many projects out there that tempt me, let”s just say that on this one I have an embarrassment of riches when it comes to reward options. On many projects out there, low priced entry level rewards and high dollar elite rewards are often separated by a large gulf of mediocrity – no so with this project. All-in-all, I find little to complain about, and would be tempted to label Hero U a model project.

I had a chance to sit down with Corey and ask him a couple questions:

Whats with the collegiate theme? Is that what fantasy has been missing all these years? Underclassmen?

Heh, not exactly.  Lori and I ran two versions of an online school for heroes – www.theschoolforheroes.com is still up, but we no longer accept assignments.  Hero-U is our idea of higher education for heroes – A game rather than a school.  Hero University is much more than it appears on the surface.  Yes, there are professors and students there, but there is also political intrigue, warring guilds, and an awakening evil and nasty magic underneath the school.

Why this project now? Do you think this trend for retro game play is ramping up or dying off?

We’ve been wanting to make this game since 2008, but we didn’t have the right combination of resources.  Kickstarter just became popular for games in 2012, and we lined up with Brawsome and Eriq Chang to form the core of our team.  Andrew Goulding of Brawsome has opened a lot of connections for us.

We don’t really think of our game as “retro”.  Yes, we’re appealing to the fans of our previous games, but not because we’re nostalgically bringing something back.  We want them to back the game because they know we’ve entertained and enlightened them in the past, and they can reasonably expect us to do it again.  Our fans are very passionate; now it’s just a question of reaching enough of them in time to fund and create the project.

So tell me about Shawn. How much can you customize him, and what makes him an interesting hero?

We decided to make this game about a specific character because that approach allows us to make a more nuanced story.  The player will have an important role in determining Shawn’s personality and how he relates to others.  Each player can also choose how much to concentrate on various elective skills.  As in other role-playing games, you will be able to upgrade Shawn’s equipment.  We’re still debating how visible that will be – The focus in Hero-U is in the core design, and in graphics, sound, and programming that support it. We’ll add more layers of detail according to time available and the budget.

How many hours of game play do you aim to provide at the $400,000 funding level? How much replayability will their be?

We can’t actually give you a number on that.  Hero’s Quest was nominally a 30-40 hour game, but we just saw a video of someone doing a speed run and completing the entire game in 10 minutes.  Hero-U: Rogue to Redemption is comparable in size to Quest for Glory 4.  Players who decide to bypass all of the combat will get through the game quicker than people who carefully work out strategy and tactics for each battle.  We’re allowing that option, but most players will find the game more fun if they challenge themselves with combat as well as with the “adventure game puzzles”.  Players who focus on the “Persona” aspect of the game and go out of their way to talk to everyone multiple times will extend game play in that way.

This game seems perfect for tablets. Any intentions to capitalize on that market?

We would like to support tablets, but they are still a very minor market share.  We expect most of our sales to come from the PC, a small percentage from Macintosh, and a tiny percentage from other devices.  As a result, our base Kickstarter goal is only enough to develop and test for PC and Mac.  If we reach the first stretch goal, or are able to raise sufficient funding later in the project, we hope to port to Linux and tablets.  We may be straining the memory resources on the tablets, and of course we’ll need to work out alternate user interfaces for them.