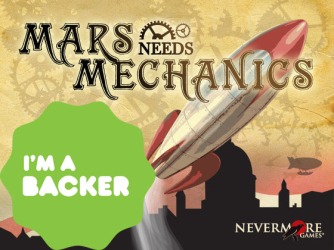 Last week we discussed the ambitious project, 10,000 hours and why I thought it was worth your money. It continues to hover at the half way point in its progress toward getting funded with a few days left on the clock, so its outcome is uncertain. Moving from video games back to board games this week I present you with the outstanding project, “Mars Needs Mechanics,” an economic board game with steam punk themes that you might someday find at your FLGS nestled between Acquire and Power Grid.

Though perhaps not for everyone, this game falls well inside the Euro Game spectrum with its lovely art, crunchy rule set, emergent behavior, and interesting theme. Continue past the break, and I’ll let you in on all the juicy details.

Though not always immediately recognizable as economic in nature, the clever titles that fill this field on Euro Game shelves are legion. Whether you are buying fuel in Power Grid, real estate in the above mentioned Acquire, building a house in Stone Age or a very different one in Alhambra the same mechanics are there in each case – buy low and sell high. That is exactly what the designers at Nevermore Games want you to do in their new title: Mars Needs Mechanics. In this game it’s 1873 and the British Royal Academy of Space Exploration has just announced a mission to colonize Mars. As one of the world’s foremost steam mechanics you’ve been invited to compete for a spot on the HMS Victoria VII.

Though I encourage you to go to the project’s page and watch their excellent game play demo, the game play boils down to a few basic mechanics. You buy parts and either resell sets of them when the price gets higher or use them to create devices that give you some kind of mechanical benefit. The privilege of first player rotates around the table smoothly at the start of each new round, and the game ends when you run out of cards in the draw pile or no one buys any new cards. Victory is determined by cogs, the game’s currency – whoever has the most, wins.

Mechanically, it looks sound, and the videos demonstrating the mechanics are well done and informative. I can’t speak to the balance or depth of the game as I have not played it, but it looks straightforward, and I don’t think that there will be any surprises in that regard. Though there are some mechanics and points of strategy that allow you to interfere with other players strategies, there is no way to ‘attack’ another player, which I appreciate.

The game itself looks well polished, and I think its production values are particularly standout. Though there are some premium boards near the end made of metal, the base line model looks well put together and definitely worth buying. I like the art, and think that it is both functional in terms of game play and well designed in terms of theme. It was the art that made me take a second look at the project when the project first posted actually.

The pitch for this Kickstarter project is also top-notch. First, Nevermore Games gets bonus points for having already launched a successful Kickstarter; this lends them a lot of credibility in my eyes. They also have an excellent video (I’m not a big fan of the videos as a rule) and have a very organized project page. Their Reward tiers are well laid out, and appropriate for what they are trying to produce. On the whole I think this is one of the better presentations I have seen out there.

After taking the time to write this review, I had a chance to ask the creators a couple of questions about this great project:

Which came first with this game, the theme or the mechanics?

Designer, Ben Rosset, is definitely a mechanics guy. He originally developed Mars Needs Mechanics as a market manipulation game tentatively called “The Market.” It didn’t get its thematic refresh until after we signed the game. It was then that we worked with Ben on the theme and the Mechanisms mechanic in the game.

You have previously funded a successful Kickstarter project. What lessons did you apply from that project to this one?

We’re very excited to have Chicken Caesar shipping in the next few weeks. To see a project go from an idea to a prototype, through relentless testing and balancing, to art and then to Kickstarter… well, it’s quite an experience. We’re thrilled and we’ve learned a lot. Much of what we took away from running the Chicken Caesar Kickstarter campaign has been applied to Mars Needs Mechanics. For instance, we’ve dropped the shipping cost for Canadian and International backers for this project. We’ve made the decision that while we’ll end up paying the difference, it’s worth it to us for players everywhere to be able to play the game. And we’re still learning things that we’ll be able to apply to our next project!

What’s next for Nevermore Games?

We’re beginning work on our next big game and it will be just that, big. Expect to hear more on it in early 2013. Beyond that, we have a few more projects going on that will ultimately be published, one of which is being designed by Bryan Fischer and John Sizemore (the designers of Chicken Caesar). We’ll also be releasing a new website in the coming months.

I see you picked up The Great Heartland Hauling Co, so did I. What do you look for in projects you back personally?

Between the three of us (Bryan, John and Corey) we’ve backed dozens of projects. We look for innovation, production quality, and most importantly passion. It’s the small, independent publishers (like us) who we love to back on Kickstarter!

What advice would you give to future game designers and/or Kickstarter entrepreneurs?

Designing games is awesome and fun. My simplest advice for game designers is to have fun and keep it fun, or you’re doing it wrong. As for Kickstarter entrepreneurs, remember why Kickstarter is here. It’s all about the community, getting feedback up front, and being honest with your fans. It’s about making things happen for people who couldn’t otherwise chase their dreams. It’s not about established brands with lots of money selling products, it’s about the small guy with the great idea and celebrating imagination. Keep it real.

Let me end this review by commenting on the fact that regular readers might notice that to date I have only covered game projects in this weekly column. Even though Kickstarter proclaimed this as the year of the game, this is unintentional, and a result of two factors. First – games is such a broad category, that hold so many of my major interests: Miniature war gaming, indie video games, choose your own adventure digital books, and board games all fall squarely in these bounds. Second, even though I often look specifically in other categories, I find little to catch my eye; this is particularly disappointing in the comic category. For obvious reasons I would love to spend more money, but all too often the rewards cost too much, the story is not something I am interested in, or the art is lackluster. A lot of things really have to come together to make me want to read a comic, let alone buy one. Trust that I am always looking to diversify the offerings I bring to you. Have a suggestion for what I should be backing/reviewing? Send an email to Caffeineforge@gmail.com or leave a comment on this thread.