FTL: Faster than light was the second project I backed on Kickstarter when I was introduced to the site in March. Early last week, I was given access to the beta, two weeks before it’s scheduled release on September 14th (Today.) This is great for two reasons: it’s a pretty awesome game, and it is the first product I have ever received from a project I backed.

It’s a great feeling to support something and finally get your hands on it after a long wait; it’s a better feeling for it to exceed your expectations in the process. Though I will give the developers credit by saying they did a good job of keeping their backers informed, each update only made me want to play more. Given that it is now available for anyone to purchase through Steam or GOG, I thought that everyone that had not yet chanced upon this gem might appreciate a review.

FTL is, at its core, a roguelike game about a spaceship. You fly from system to system rather than walking from room to room, and you upgrade your ship with scrap rather than finding random upgrades that may or may not be useful. Like all great roguelike games that come before it, it is hardcore; there is no reloading from an earlier save, no trying again if you fail to beat the boss. Game over is a very literal phrase in the type of game, as each failure takes you back to the beginning of the game to try again. That said, the game is not terribly long – I beat it on easy mode in just over an hour. Unlike most roguelikes though, the game is finite – there is a boss, and an end. According to developers this is done for balancing reasons.

The combat is tactical and engaging, allowing you to target the systems and subsystems of enemy vessels, crippling systems, and starting fires that need to be put out before they lead to further damage. Your crew will always be busy – whether it be manning critical systems, making repairs, putting out fires, repelling boarders (yes boarders,) or simply trying to survive. As I mentioned previously, the ship is upgradeable during play (pictured below) and is really the character in this story, not the crew. Though you start out initially only being able to play one variety of ship on two difficulty modes, more options in both catagories become available as you accomplish various achievements and milestones within the game. 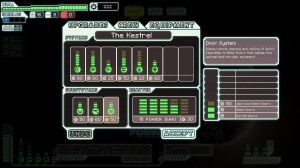 As mentioned previously, the game is available as of today, at the FTL web site, GOG, and Steam for the PC or mac (if you want the Linux version, you have to get it at their website.) It is worth noting that they are offering a 10% discount for purchasing it the first week, if the steep price tag of $10 was going to break you.

At this point, I have played the game for a dozen hours, and think it likely I will get at least a dozen more out of it. The art and music quality is both higher than I expected, and the game play is intense and engaging. I give this game an 8.5/10 and would recommend it to anyone that has ever wanted to divert all power to the forward deflector array. If I were you though, I would play the tutorial before you jet off into the universe; despite being simple, the commands are not immediately intuitive.

During a brief conversation I had with Justin Ma, he told me that they had to cut some of the content and planned features during development, and that depending on the reception, they hope to continue working on it. He expects that they will “do a few smaller free updates,” and they might do some “larger, multi-month work sell it as a non-expensive DLC.” So let’s all go out there and make this title a success so they will continue to add to their wonderful product. I, for one, doubt I will drink my fill of 8-bit space combat in the foreseeable future.

The feature that tops my list of must have addons? Giant space monsters. How about you?