Board Games: Welcome to my Closet 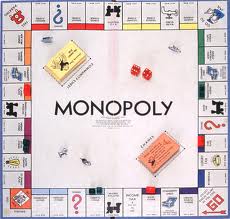 American board games have, until recently been dominated by simple rules, adversarial tactics, and a large degree of randomness. Like so many of you, I grew up with this instantly recognizable example of gaming history, and like so many of you I am sick to death of it. Along with this Parker Brothers classic, I enjoyed (and eventually grew tired of) all the basics: Life, Risk, Sorry, Othello, Yahtzee, Rummy, Chess, and so many others. (Full disclosure: I do however still own a copy of Connect Four. I love that game.)

During my teenage years, I largely outgrew them as I discovered more complex and satisfying games :RPGs and CCGs. Though I would still play the occasional bout of Axis and Allies, board games as a whole were no longer on my short list. If you had asked me then, if I was ever likely to play them again, I would have told you that it was very unlikely.

I would have been very wrong.

It wasn’t until I was in my twenties that my horizons were broadened and I fell in love with the Euro Game. Wikipedia defines a Euro Game as:

A German-style board game, also referred to as a Euro game or Euro-style game, is a class of tabletop games that generally have simple rules, short to medium playing times, indirect player interaction and abstract physical components. Such games emphasize strategy, downplay luck and conflict, lean towards economic rather than military themes, and usually keep all the players in the game until it ends. German-style games are sometimes contrasted with American-style games, which generally involve more luck, conflict, and drama.
German-style games are usually less abstract than chess, but more abstract than wargames and train games. Likewise, they generally require more thought and planning than party games, such as Pictionary or Trivial Pursuit, but less than classic strategy games, such as chess and Go.

To me though, they were just a breath of fresh air. Very complex and dynamic, Euro Games have the hallmark of being able to support a wide variety of strategies to achieve victory. Another hallmark about Euro Games though, in my opinion is that the theme and mechanics are largely independent; if you like a deck building game you can play it with magical kingdoms or werewolves, if you like economic domination you can play a game involving farms or casinos. Each game is part substance and part style, and if you like a certain aspect it is not too difficult to pull that thread and find other games in a similar vein. Few would put Alhambra in the same category with Ticket to Ride, for instance, but the similarities are striking.

Like anything else, there are bad games out there, there are simply so many to choose from that are instant classics that the hobby can be somewhat daunting to pick up, and if you buy a game you don’t like, it can be a costly mistake. One major disadvantage Euro Games have when compared to the kind most Americans are used to is that they can be pricey. Games with an MSRP are not uncommon, though the $40-$60 is much more typical. How do you know that your money is being well spent? Easy, play it before you buy it. Many great FLGS have a board game night where you can go play a game with people who will be glad to teach you the ropes. If you don’t like a game, you can always try another. With hundreds to choose from, you can be sure there are some out there that will suit you.

You can see my purchases in this arena below. These days my books and comics are all purchased in digital formats; my video games are digital downloads from steam. Only my pile of beloved board games continues to grow. It should be noted here that digital board games are making great strides; the versions of Small World and Ticket to Ride for the iPad are nothing short of phenomenal. The days of the analog board game might in fact be numbered along with everyone else. 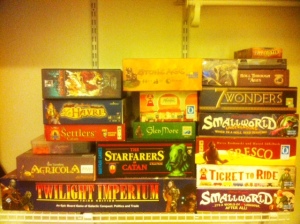 Of those, I would recommend the first two as gateway games to ensnare casual gamer types, but the final three are pretty involved and should be reserved for people with more experience in the genre. What games do you enjoy most? I’d love to know, even if it turns out to be Monopoly after all.

6 thoughts on “Board Games: Welcome to my Closet”