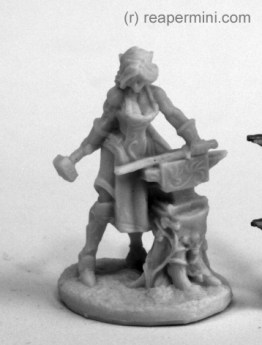 This week we show one of Bones III’s townfolk, the rather unusual elven blacksmith. But all those fancy, high-end elven blades have to come from somewhere, right?

Miniature   Wednesday again because Monday was our little son’s second birthday and we spent the day first preparing for it and later playing together with him and his new toys. The plush shark had a party hat too, just so you know.

The concept of the mini is really interesting since dwarven and even human (black)smiths are a dime a dozen, but the creators of Narsil and other legendary elven weapons are normally underrepresented. I also like the pose and how muscular she is despite being an elven female, who normally are double skinny.
On the technical side I found some flaws too, like a lack of detail on her sides, and both my and Dirk’s version had some strange knob protruding from her right arm, and cutting that off damaged a bit of the otherwise nicely sculpted muscles.
I also wondered with she would have so much bare skin while working, sparks and all that, but maybe elven forges work on a different kind of fire? Magic can of course explain everything *laughs*

I painted mine inspired by a LARP setting:

Dirk and I have different LARP characters, and two of them are members of a religious order (Good Guys ™ who worship dragons) which has quite a developed background. I imagined the blacksmith as living and working in the order’s eastern stronghold so I gave her an light asian skintone and the red/white colors of the “custodian” aspect, plus of course the black dragon emblem.
As for the execution I’ll probably do some more detail work or blended highlights one day since I really like the mini, but I’m happy so far. The simple wash makes the paintjob look a bit “dirty”, but you know what? A blacksmith, workin all day on a furnace, with weapons oil and charcoal all around, is allowed to look dirty. Even an elven one  😉

Jim has his own theory about elven blacksmiths:

He wrote: “My Elven Blacksmith is pretty straight forward, but came out fine I think. The only part that really needs a little more is the stump, which is still a little too gray. I’m not too sure about blacksmithing with that much skin exposed, but maybe elves are just more agile than humans.”
I like your take on the mini, it defintely has some Lord of the Rings-vibe, as if she was Arwen (after some extra workouts) mending some legendary artifact. The green and brown do that, I suppose, and also the grey stump, like the silvery trees they have in Lothlorien. Or were they golden? Not sure if elves would cut one of those down, though 😛
Unfortunately the pic seems to be slightly overexposed so some parts of her light skin are not quite visible (or is it her radiant beauty?), maybe you could try and cover the light/flash with white paper or cloth to soften the light a bit. 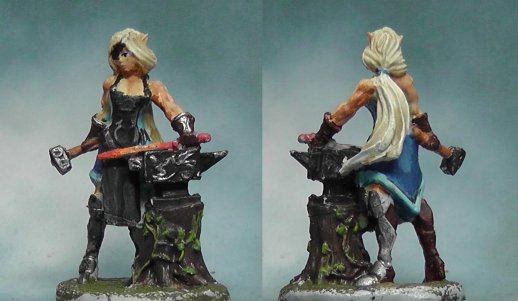 He wrote: “I liked the hair of this mini. I painted her a bit like Elsa (you know, Frozen). Otherwise I am not too enthusiastic as there are a lot of murky spots in this mini, like both the left and the right side of her body are kinda undefined, with no clear separation between her right arm and her body and where is the belt of her apron on her left side?”
I agree that there are areas of the mini that could use a lot more detail, I also found the separation of clothing and boots/armour on the back of the legs difficult. I don’t know if that’s due to the castin process? I’d have to check other minis to see if those have similar problems.
Anyway, I really like the combination of the pale blonde hair and the black apron, like we have a “Dark Elsa” thing going on there – the blue gives exactly the amount of color to keep this from being monochrome.

He said: “As for the model, I wanted her to look like she was crafting a sacred weapon, so not a typical blacksmith.”
Cool idea, I always paint best id I have some kind of “theme” to inspire me (and keep me going). Will you use the mini in a campaign of some sort?
Funny how both you and Arjen decided to use black, white and blue, and how different your results are! The combination of white and gold, especially with the golden weapon, really sells the “sacred” cancept. 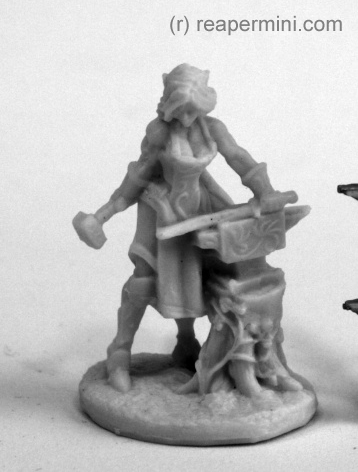 Want to participate in the next post? Email the pictures of your minis until Friday 11/23/18 to